Most people think they can’t make a difference, or are too timid to try. Here is an example of what just one person can do to fight back! 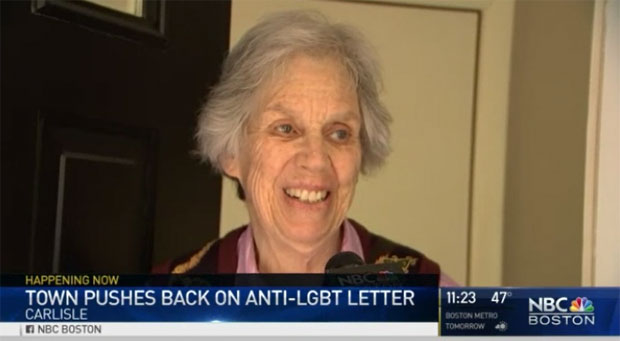 An elderly woman in ultra-liberal Carlisle, Mass. had the nerve to publicly criticize the “gay” flag outside of a church in the center of town. She caused such an inflamed reaction that it was reported in Boston’s NBC-TV evening news.  (See below.) But she’s not backing down — which inflames the leftist reactionaries even more! 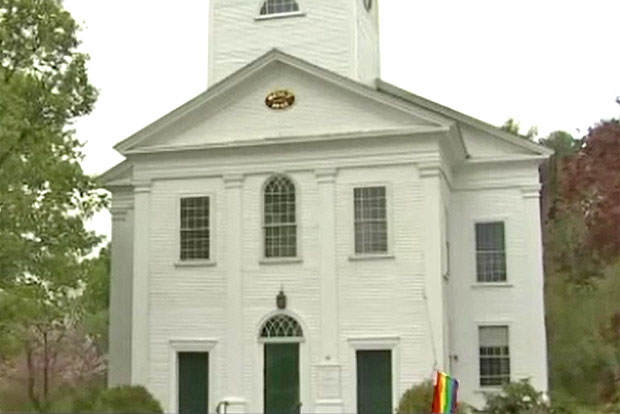 The Unitarian church in the center of Carlisle, Mass.

Sally Naumann, an 85-year-old resident of Carlisle and a longtime MassResistance activist, had had enough. She was very upset that the Unitarian Church in the center of town is flying a “gay” rainbow flag outside. She is distressed because people she knows have died of “gay”-related diseases. She strongly believes the homosexual lifestyle should not be promoted.

Interestingly, for nearly 25 years Sally and her husband had been members of that Unitarian Church in Carlisle, and she was also co-chairman of the Parish Committee. But a few years ago, while speaking at a Sunday service, she raised concerns about the church’s promotion of the homosexual lifestyle. For simply saying that, the church leaders declared her to be “unwelcoming”. After a “hearing”, Sally was banned from the church and told that if she came back they would call the police!

Sally is a delightful lady, as well as fearless. In 2005, she went undercover at the homosexual GLSEN conference at Brookline High School. She picked up a copy of the extremely pornographic and disgusting “Little Black Book” that was being given to kids. It caused such outrage that even Gov. Mitt Romney went on television to distance his administration from it.

A simple letter to the editor started a war in town!

On April 28, 2017, Sally wrote a letter to the editor to the local Carlisle Mosquito newspaper. They published it at the end of all the others, on page 22, near the back of the paper. Here’s what it said:

One of the saddest vistas I know is that of the beautiful rainbow flying as a flag to welcome and encourage the extremely dangerous behavior of homosexuality. Each time I go through the center of my town of Carlisle, I see such a flag and my heart cries out—why, Why?

Indeed, why is this flag being used to speak well of homosexuality and encourage the behavior? Where is the caring for people who for one reason or another have gotten into this behavior? And homosexuality is a behavior; no one is born homosexual.

Where is the truth? Where is the help for such people? It seems they are only helped down the garden path to some of the worst diseases known to man. Just look at the Center for Disease Control and Prevention website for information as to how devastating homosexual behavior actually is. Then look at pfox.org for personal stories where ex-homosexuals speak out.

Knowing how many have contracted HIV and AIDs and even died as a result of homosexual behavior leaves me wondering why people would promote such behavior–—let alone churches such as the Unitarian Church and the United Church of Christ.

Sally’s letter got attention, that’s for sure!

In the next issue of the Carlisle Mosquito (May 5) there were nine angry letters attacking her (and none supporting her). Even by the low standards of a “liberal” town (that prides itself on being “upper class”), the response was pretty unhinged.

One letter writer said Sally’s letter is bringing “fear” to the community and said that she is now locking the doors of her house. Some letters listed past acts of terrible violence that were likely caused by sentiments like Sally’s.

And of course there’s the blatant hypocrisy: The same letters that said that Sally’s views should be excluded from the newspaper and not be tolerated, were then calling for a climate of “tolerance and inclusion.”

Most of this is, on its face, irrational. That’s because Sally really got to them! The town’s liberals could not deal with Sally’s facts and logic. Instead, their letters were calculated to foment as much anger and hysteria as possible.

The attacks on Sally continued in the May 12 issue, with seven more angry letters.  Sally was called “homophobic”, “hateful”,  “intolerant”, “prejudiced”,  “libelous”, and “malicious”. Her views were compared to Vladimir Putin, Breitbart.com and Steve Bannon, Kellyanne Conway, and Nazi Germany. Whew! We can’t wait till next week.

In the May 5 issue of the newspaper, next to the letters, was a scathing editorial aimed at Sally and her letter. In particular, the editorial explored whether Sally’s facts and opinions should be banned from the newspaper in the future.

Sadly, the editorial shows the level of nonsense and shallow thinking that America’s journalist class has lowered itself to. It stated that the newspaper’s staff  “believes it is of supreme importance to be sensitive to the concerns of marginalized populations.” (Not conservatives, clearly.) It admitted that in past years the paper had run letters similar to Sally’s without a problem. But now the community must be protected from these views. That’s because, the editors say:

[T]here are times when a position becomes so repulsive it is no longer suitable for discussion, and perhaps advocacy of homosexuality as a sickness has migrated into that territory.

So the truth of the medical consequences has no real value. And the message is that anyone who agrees with Sally can forget writing any letters.

One of the letters in the paper was from a local moonbat political group saying that people should fight Sally by putting out rainbow flags everywhere in town. They announced they would be putting hundreds of small rainbow flags outside the Unitarian Church for locals to take. Within a few days, there were lots of rainbow flags across town. 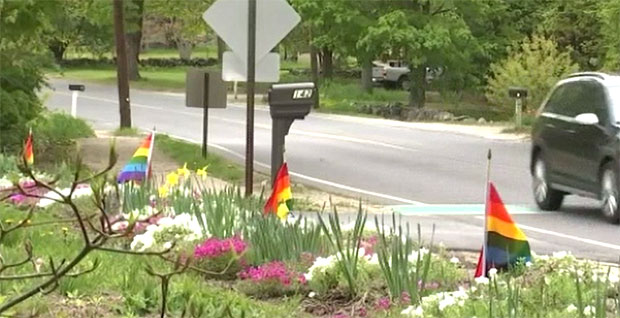 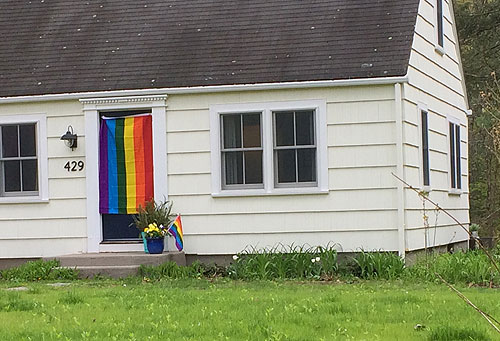 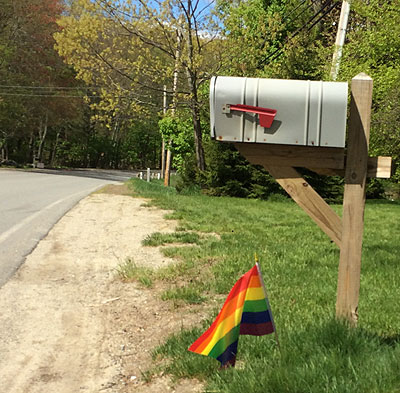 Make no mistake. This is a psychological strategy to make people in town feel that everything is overwhelmingly stacked in one direction – and any more “outbursts” like Sally’s are useless, and will be dealt with harshly.

Sally didn’t care, though. She had made her point.

NBC-TV in Boston jumps in — pays Sally an unannounced visit

Over the next week the hysteria over this continued to spread beyond Carlisle. On May 10, NBC-TV in Boston jumped in to cover this story.

Not surprisingly, this was not a “friendly” interview from Sally’s standpoint. The television crew did not call Sally’s home first; they just showed up at her door unannounced. That has to be a pretty unnerving experience. But Sally took it all in stride, made her points very well, and stood her ground. After that, they interviewed local liberals.

That evening, here’s what was broadcast in metropolitan Boston and southern New Hampshire. 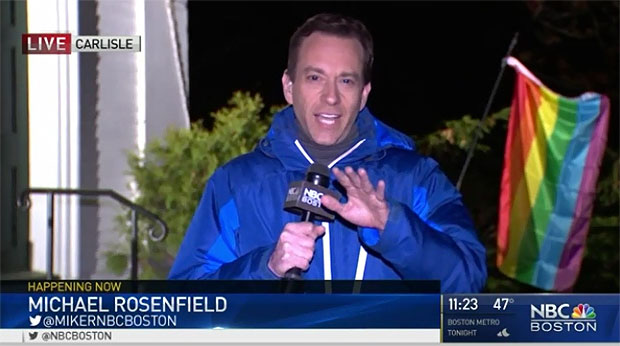 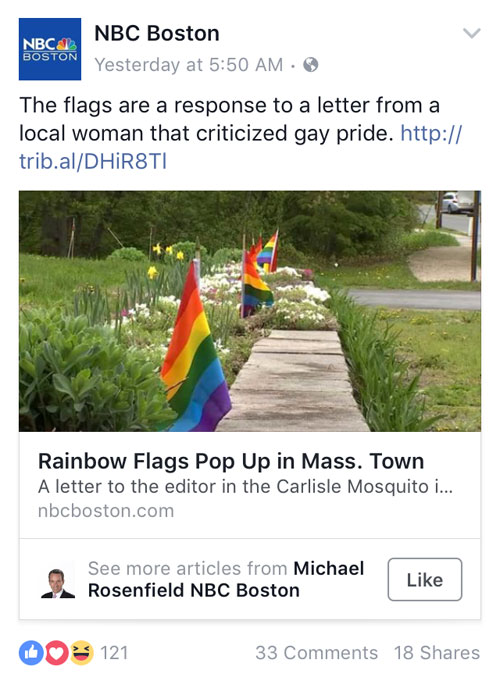 But also some silent support for Sally!

There seems to be an undercurrent of support for Sally. Sally told us that when she went to the Post Office one day this week, she came out to find that someone had put some flowers in her car door handle.

On Saturday, Sally received a handwritten letter in the mail:

Thanks for the courageous letter to the Mosquito.

Having lived for 30 years in Carlisle and had two children go through the school system, I’m confident the push-back from the mentioned parties will be significant. Thankfully, we no longer live there.

We have a feeling there will be more and more, now that Sally has publicly stood up!

MassResistance comes to help out in Carlisle

Because Sally’s been such a great activist over the years in such a weird town, we just couldn’t resist adding more to the “alternative” viewpoint. Since the church parishioners seemed just a tad uninformed about the health issues involved, we put a complimentary copy of our new book, “The Health Hazards of Homosexuality” on their doorstep. 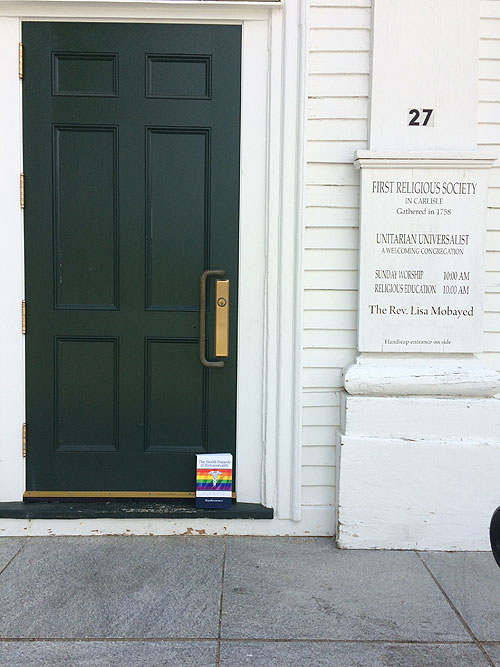 Hopefuly, they’ll do some serious reading! 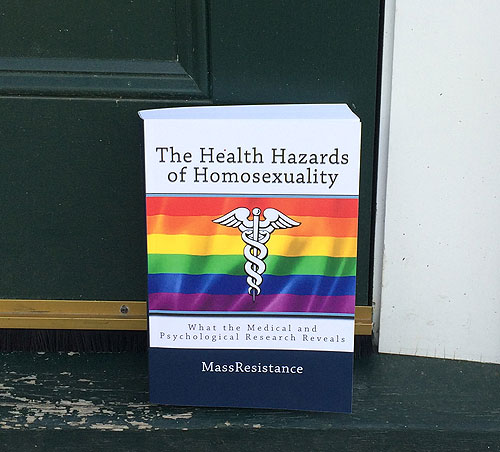 Before we left Carlisle, we noticed some “alternative” stickers had popped up around the town square! Maybe there is hope for diversity of opinion there, after all!

Every little bit makes a difference

If Sally can do this much by herself, imagine what you can do! We hate to say this, but she has more courage than probably 90% of pro-family people. That’s got to change.

The LGBT movement (and the Left in general) knows it cannot win through normal discourse and factual challenges. The dominance of their absurd ideology depends on intimidating everyone into cowering in fear and not speaking up. Every time you do it, it breaks it down a little more. Eventually their dominance will collapse. That’s what Sally has done in Carlisle, and that’s why they’re so angry.

Sally told us that after this initial furor has died down, she plans to write another letter to the editor elaborating further on her points. That should be interesting. We’ll keep you posted!