Within hours of renowned evangelist Rev. Billy Graham’s death Wednesday from natural causes, one of the most left-wing newspapers in America ran a veritable hit piece that essentially accused him of being a lousy husband and father.

Titled “Divorce, drugs, drinking: Billy Graham’s children and their absent father,” the “analysis” piece by The Washington Post portrayed Graham as a religious fanatic who prioritized his relationship with the church over his entire family.

“As Graham’s crusades took him throughout the world, little was left for (his wife) Ruth and the children — Gigi, Anne, then Ruth (long called Bunny), Franklin and Ned,” wrote Post contributor William Martin, a professor of religion and public policy at Rice University.

“Once, when Ruth brought Anne to a crusade and let her surprise her father while he was talking on the telephone, he stared at the toddler with a blank look, not recognizing his own daughter. In a turnabout a few years later, young Franklin greeted his father’s homecoming from a crusade with a puzzled, ‘Who he?’”

Sadly, this is indeed true, though “(i)n later years, Graham acknowledged that if he had to do it over again he would have devoted more time to his children,” as noted by the News & Observer.

“I missed so much by not being home to see the children grow and develop,” he reportedly wrote in his autobiography. “The children must carry scars of those separations too.”

Of course, the Post’s piece failed to mention this. Nor did it cite Graham’s work, which included founding one of the world’s top charities — the Billy Graham Evangelistic Association — not to mention participating in the civil rights movement and preaching the Christian Gospel to nearly 215 million people.

Instead Martin then turned his attention to how some of Graham’s kids, including even his youngest son, Rev. Franklin Graham, partook in drugs and alcohol during their adolescent years. Just to be clear, though, many men and women, including yours truly, made mistakes as teenagers.

Many adults have likewise experienced a divorce during their lifetime, including three of Graham’s five children. Martin made certain to mention this as well.

Look, I’m not going to sit here and claim Martin’s rundown of Graham’s family life isn’t factually incorrect, but I will certainly suggest it was purposefully designed to tarnish his reputation. The headline of the piece says it all, does it not?

And wouldn’t you know it, the Post’s leftist readers ate it up like candy: 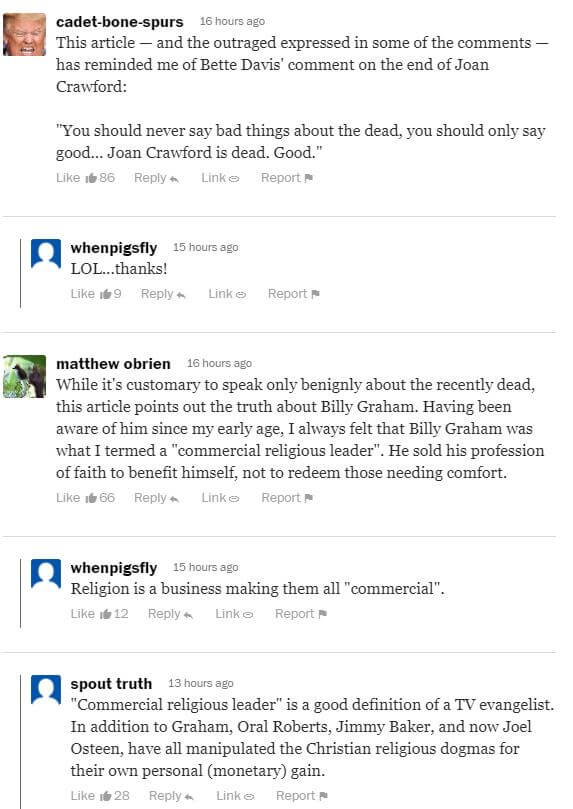 God forbid hateful leftist secularists let any man or woman rest in piece. Recall that these are the same sorts of people who responded with joy upon the death two years ago of former first lady Nancy Reagan.

While they’re not representative of all liberals, they’re representative of enough liberals to make me wish Graham was still here with us, as God knows we could use his wisdom and kindness now more than ever before.