Parents across the nation will pull their children out of school on April 23 to protest sex education programs that have become steeped in gender ideology due to an agenda forced by pro-abortion and LGBT rights organizations.

The protest is taking off from Charlotte, North Carolina, to nearly a dozen other cities, reports the Washington Times, including Austin and San Antonio, Texas; Spokane, Washington; Sacramento, California; Bloomington, Indiana; and Martinsburg, West Virginia.

Internationally, protests are planned for Vancouver, British Columbia, as well as Mulgrave, Australia:

“Most parents do not know this is taking place in schools,” said one of the protest’s organizers, Elizabeth Johnston – also known as the “Activist Mommy.”

“The wool is completely being pulled over their eyes, and sometimes when parents catch on and start inquiring, bureaucrats are using deceptive means of not informing them what is being taught.”

Johnston first announced plans for the Sex Ed Sit Out this month in an interview with the Christian Post.

“Why are our tax dollars going to pay for curriculums and resources that teach dangerous and promiscuous behaviors which most parents find morally abhorrent and the CDC has stated are a health risk?” she asked: 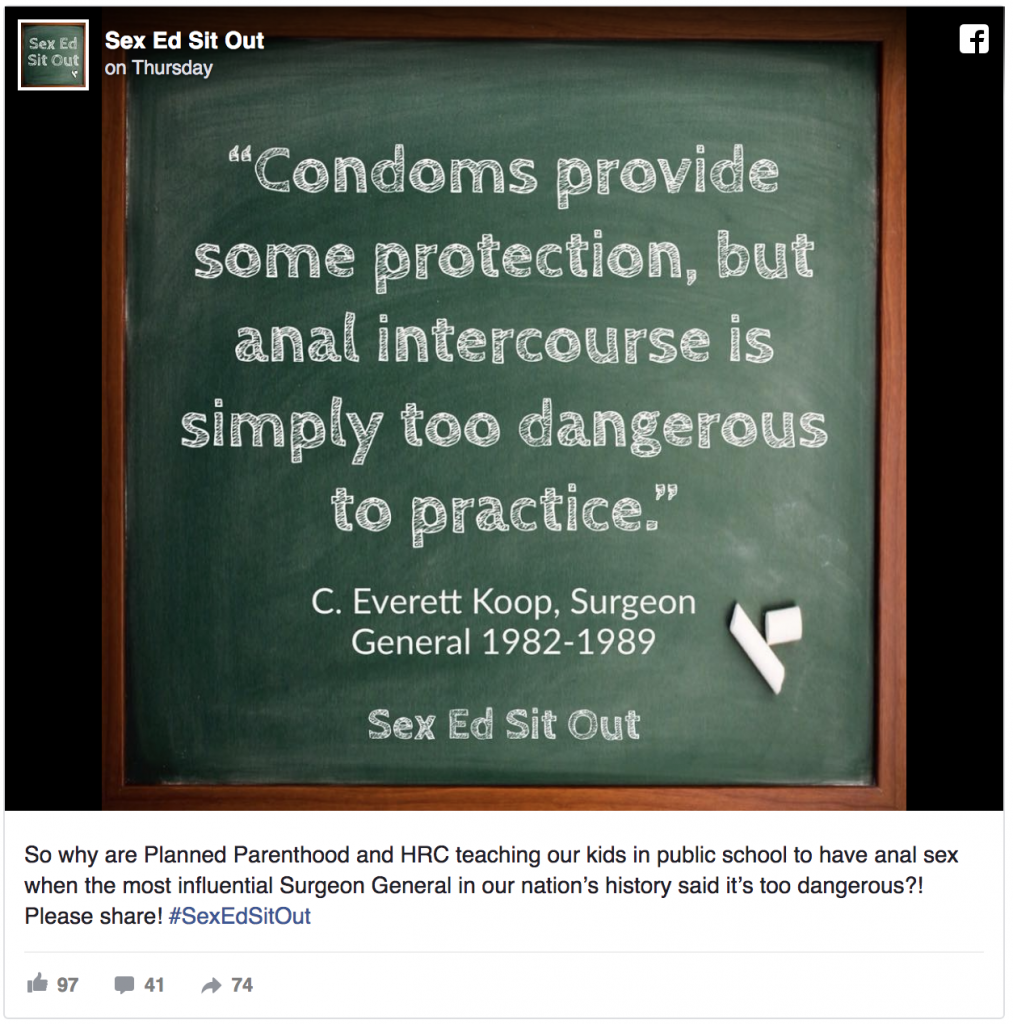 Johnston and other concerned mothers started a network and began planning the protest.

“I kept stumbling across viral videos online of concerned parents sharing the graphic nature of sex education and anti-bullying curriculums,” she told the Post. “I personally homeschool my children but felt sorry for the parents who feel helpless to stop the stranglehold of special interest groups who are funding and pushing these graphic and dangerous programs in public schools.”

On the day of the Sex Ed Sit Out, parents plan to send the same letter to school principals explaining the absence of their children. The letter reads, “Pornographic sex ed is being implemented across our globe in an attempt to indoctrinate our children with ‘sexual rights.’ This is unacceptable and [I am] joining others both nationally and globally in taking a stand to say ‘enough!'”

“We send our kids to school to learn reading and writing and science and history, not how to question whether they really are a boy or a girl,” Johnston told CBN News.

Parents have been pushing back against school boards and administrators who cater to the notion that gender ideology and LGBT-inclusive sex education must be included in school curricula due to civil rights and anti-bullying laws – as threatened by groups such as the Human Rights Campaign and Planned Parenthood:

Abby Johnson, former Planned Parenthood health center director-turned pro-life activist, told Breitbart News, “If you go to Planned Parenthood’s social media accounts, you will see post after post about their desire to push their sex education on children. And that is why they still exist. They sell a product to our young people.”

Johnson, who founded And Then There Were None (ATTWN), an organization that helps abortion workers leave their jobs, says Planned Parenthood actually discourages children from talking to their parents about sex.

Monica Cline, another former Planned Parenthood health educator who left her position, also told Breitbart News that, in hindsight, she views Planned Parenthood’s sex education as “very similar to how pedophiles prepare children for them to have sex with them. You start to break down their natural inhibitions.”

“One of the first exercises in comprehensive sex education-and you see this across the board in all the comprehensive sex education courses that you’ll find in any public school-is that you start to try to break the ice by asking the kids to tell you all the slang words that they know about sex or body parts,” Cline explains. “And they giggle, and they’re nervous, and you can tell that they’re inhibited, but they start to break down that barrier, those inhibitions.”

Parents across the U.S. and in Canada have been confronting their school boards with demands for more input into middle and high school sex education curricula but, in many cases, are finding the door is closed to them.

In Fairfax, Virginia, parents were recently prohibited from questioning a motion at an Education Curriculum Advisory Meeting to replace the terms “biological sex” and “biological gender” with the phrase “sex assigned at birth” in public school curricula.

The Post reported on the tension at the meeting between parents and committee members:

Parent Monique Baroudi told The Christian Post that Press suggested the parents should be asked to leave so the meeting could continue, which she saw as an attempt to stifle parental involvement.

But after the parents refused to leave, the meeting was moved to the cafeteria of the school.

The meeting was moved but not before Press and other members of the committee got into a heated exchange after the suggestion was made to kick out the public from the meeting.

LGBT rights organization, the Human Rights Campaign, promotes its program known as “Welcoming Schools,” the purpose of which is to “create LGBTQ and gender inclusive schools, prevent bias-based bullying, and support transgender and non-binary students.”

Planned Parenthood’s Get Real program is a Comprehensive Sex Education (CSE) curriculum that assumes all young people will be sexually active. In addition to teaching children about contraception and abortion, the program focuses on LGBTQ issues and terminology.

In Grade 6, the Get Real curriculum says it introduces students to the “key Social and Emotional Learning (SEL) skills” they will supposedly need to be able to discuss sexual relationships and how to avoid pregnancy and sexually transmitted infections. It’s seen by some parents that the school shouldn’t actually be teaching their children these topics, even as important as they are, it isn’t for schools to be doing. Instead, it’s seen as something the parents should be teaching their children in a way they see fit, that could mean they might choose to use educational resources into such topics on websites like Lovegasm.co and others, as well as take as much time as they need to really enforce the dangers of unprotected sex, teen pregnancy and all things related to sexual encounters and sexual health.

According to the program’s table of contents, in Grade 7, students also discuss sexual identity and “examine the myths and facts about sexual orientation.” They also learn how to use a condom and review the use of hormonal contraception, including emergency contraception after sexual intercourse.

During April each year, the Gay, Lesbian and Straight Education Network (GLSEN) promotes its “Day of Silence” to public middle and high school students, asking them to remain silent throughout an entire school day to promote the LGBT agenda among young people.

GLSEN was founded by gay activist and former Obama administration “Safe Schools Czar” Kevin Jennings. The organization’s website provides K-12 “educator resources” that include an “LGBT-inclusive curriculum” and lesson plans on topics such as how to celebrate “LGBT History Month” in classrooms and “ThinkB4YouSpeak,” a guide to LGBT politically correct language.

A history and English Language Arts lesson–reportedly aligned with the Common Core standards–is offered on the story of Matthew Shepard, a gay young man who was murdered years ago and who is an icon for militant LGBT groups. The story of Shepard’s murder, however, was debunked five years ago by investigative journalist Stephen Jimenez, who discovered that Shepard was not murdered by a stranger because he was gay, but, rather, by a fellow drug dealer with whom he often had sex.