A soon-to-be-released updated edition of an Advanced Placement (AP) U.S. History textbook teaches students that white Christian Americans are finding it “difficult to adjust” to becoming a minority and puts forward the perception that President Donald Trump’s election occurred because his apparent “racism connected with a significant number of primary voters.” 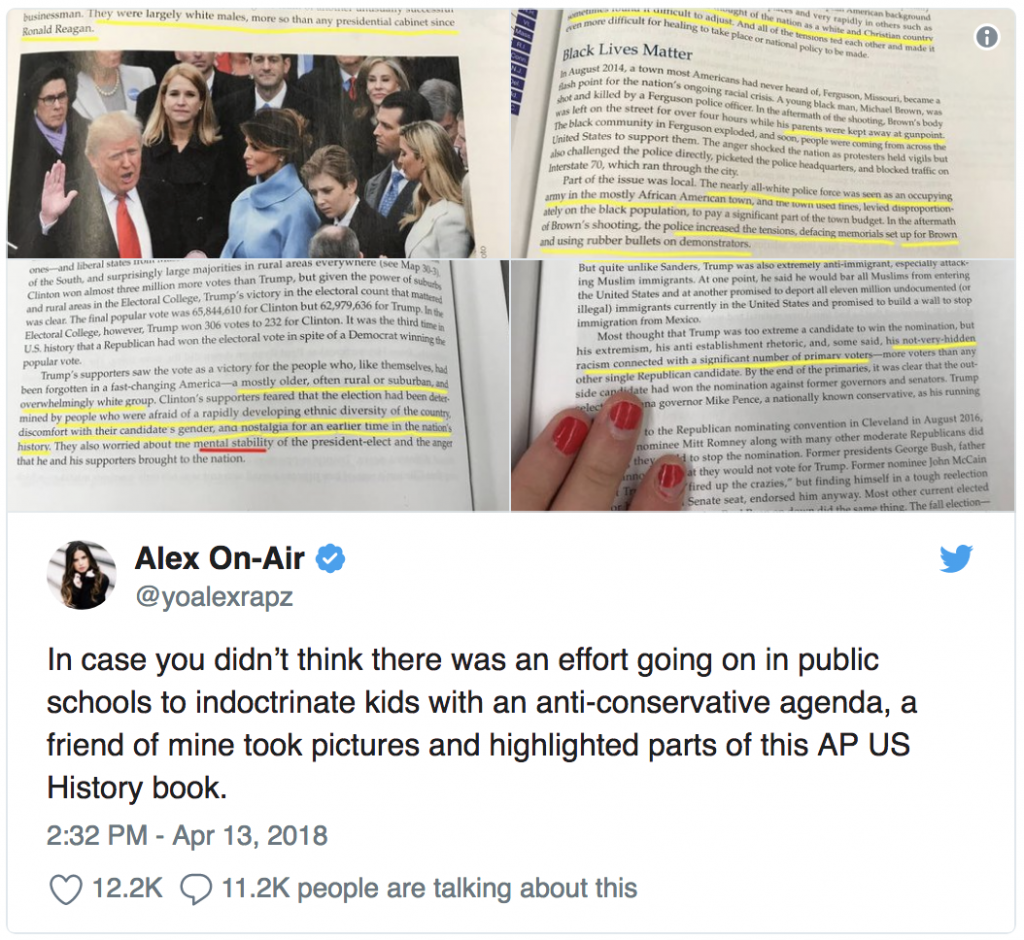 James Fraser’s By the People: A History of the United States, 2ndEdition, is published by Pearson and has a 2019 copyright date.

Alex Clark – co-host of the Indiana-based morning radio Joe and Alex Show– tweeted photos of the cover and several pages of the book that she reports were sent to her by a friend in Minnesota.

“In case you didn’t think there was an effort going on in public schools to indoctrinate kids with an anti-conservative agenda, a friend of mine took pictures and highlighted parts of this AP US History book,” she wrote. “She says, ‘This was the new ‘sample’ AP US HISTORY book sent to my school. The chapter mentions Bengazi [sic] (no ACTUAL details what happened) and mentions her ‘private email server.’”

The book pages that were photographed included a paragraph that describes Trump’s cabinet as wealthy, and “largely white males, more so than any presidential cabinet since Ronald Reagan.”

Another photographed page states, “Trump tapped into the sense of alienation and “being left behind” that many voters – most of all white poor and working-class voters – felt.”

“Most thought that Trump was too extreme a candidate to win the nomination, but his extremism, his anti-establishment rhetoric, and, some said, his not-very-hidden racism connected with a significant number of primary voters – more voters than any other single Republican candidate,” the author continues.

Fraser describes Trump’s supporters as “a mostly older, often rural or suburban, and overwhelmingly white group,” while Hillary Clinton’s supporters are portrayed as fearful “the election had been determined by people who were afraid of a rapidly developing ethnic diversity of the country, discomfort with their candidate’s gender, and nostalgia for an earlier time in the nation’s history.”

“They also worried about the mental stability of the president-elect and the anger that he and his supporters brought to the nation,” Fraser adds about Clinton voters.

Stanley Kurtz, senior fellow at the Ethics and Public Policy Center and contributing editor to National Review Online, has studied extensively the revised AP U.S. History framework and emphasized its left-leaning portrayal of U.S. history. While he tells Breitbart News he has yet to read Fraser’s fuller text to ensure the excerpts in the tweeted photos convey a fair impression, he asserts the material in the photos is “very disturbing.”

“These passages represent an almost purely partisan liberal Democratic perspective dressed up to look like balanced history,” Kurtz explains. “If this textbook was an outlier, that wouldn’t much matter. Unfortunately, the tilt of this text is entirely typical of the left-liberal bias that pervades just about every other AP U.S. History textbook.”

Kurtz has been a leader of an initiative calling for competition to the College Board – the private company that produces the SAT test and the various AP exams. The College Board president is David Coleman, who served as the “architect” of the Common Core State Standards, and then moved on to align the SAT and the AP frameworks with the standards. Kurtz explains:

The College Board has made matters worse, not just by issuing a left-biased curriculum framework but by insisting that its AP U.S. History course cover the most recent years of American history. That was not done before, precisely to avoid the dangers of politicization. Yet the very first textbook updated to match the controversial new AP U.S. History curriculum included a section on the Obama presidency, then still in progress.

The College Board now explicitly says that the final period covered by AP U.S. History runs from 1980 to the present. So the new college board policy, which invites political hit-jobs in the guise of history, has led to what certainly looks like a clear case of abuse. Even if the College Board were to announce tomorrow that it won’t ask questions about administrations in process, this controversy teaches an important lesson about the overall tilt of the AP U.S. History curriculum.

In 2015, while Kurtz was reviewing the College Board’s revised AP U.S. History framework, he told Breitbart News why this battle was even worse than what ensued over the highly controversial Common Core standards:

The AP U.S. History (APUSH) battle is the leading edge of what is rapidly becoming a national curriculum controlled by the left. The reason why APUSH is the tip of the iceberg on this is because the AP program is run by the College Board and that program is now expanded to cover about one-third of America’s students. However, the College Board — and some of the government folks who subsidize the College Board — want to expand it even further. They’d like to see it move up to maybe 40 percent, 50 percent of American students.

The AP program covers every single subject in the curriculum, and we’re talking about one-third, and maybe 40 percent, 50 percent of American students, perhaps more. So, if you control the curriculum for every single AP course, you have in effect created a national curriculum. You have made an “end run” around the states and the districts and, of course, the voters and parents they represent, and you have literally handed control of America’s curriculum to the leftist college professors who advise the College Board.

Kurtz now says it is clear that what appears to be another “egregious instance of bias” in the latest edition of a text to be used by AP U.S. History students “is no fluke.”

“It’s just a particularly clear example of the left-liberal bias that pervades nearly all of the College Board’s AP U.S. History course material, from the Trump administration right back through the colonial period,” he asserts. “Maybe this incident will wake parents up to the need for a real alternative to the College Board’s biased curriculum.”