“I just said enough is enough. I voted for both of their nominees, [Justice Sonia] Sotomayor and [Justice Elena] Kagan. And all of these Trump state Democrats voted against Kavanaugh. They voted against the tax cuts,” the South Carolina senator said on “Fox & Friends” Monday. “It’s now time to clean house and put people in the Senate that can help President Trump change America.” (RELATED: Lindsey Graham Shares What Drove Him To Stand Up For Brett Kavanaugh)

Graham said Democrats brought out a “different side” of him during Kavanaugh’s Supreme Court confirmation process.

“They brought out a different side of Lindsey Graham and I hope all these candidates that voted against Kavanaugh, I hope they lose,” he added. 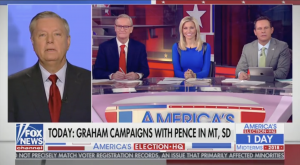 Graham was asked what the GOP should focus on this election cycle and he said they must remind voters of how the Democrats treated Kavanaugh and highlight America’s economic success and the threat of illegal immigration.

“Remind people what happened to Brett Kavanaugh — that the Democrats will do anything to win. They do not accept the fact that President Trump won,” Graham continued.

“Talk about the caravan and the growing economy and get our vote out. I’ve never seen Republicans more united than I do now,” he concluded, adding:

“I think we’re going to kick butt in the Senate and the House is too close to call. And the last 30 days has been a nightmare for Trump state Democrats between Kavanaugh, the caravan and a growing economy.”