“I never imagined I could loathe the @GOP more than the I loathe @TheDemocrats, but they got me with this suck-ass budget,” Woods tweeted to his 1.36 million followers, adding that he hopes “they get what they asked for in November. When will these RINO wimps stop sticking their asses in the air for the Democrats to violate?”

This massive omnibus bill, which only funds the government for six months, is widely seen as a total capitulation to Democrats. Although Americans put Republicans in charge of all three branches of government, Planned Parenthood remains fully funded, while there is virtually no funding for President Trump’s wall or border security. The bill is expected to add another trillion dollars to a national debt that is already over $20 trillion.

In other tweets, Woods also hammered Trump over his broken promise to build a border wall: 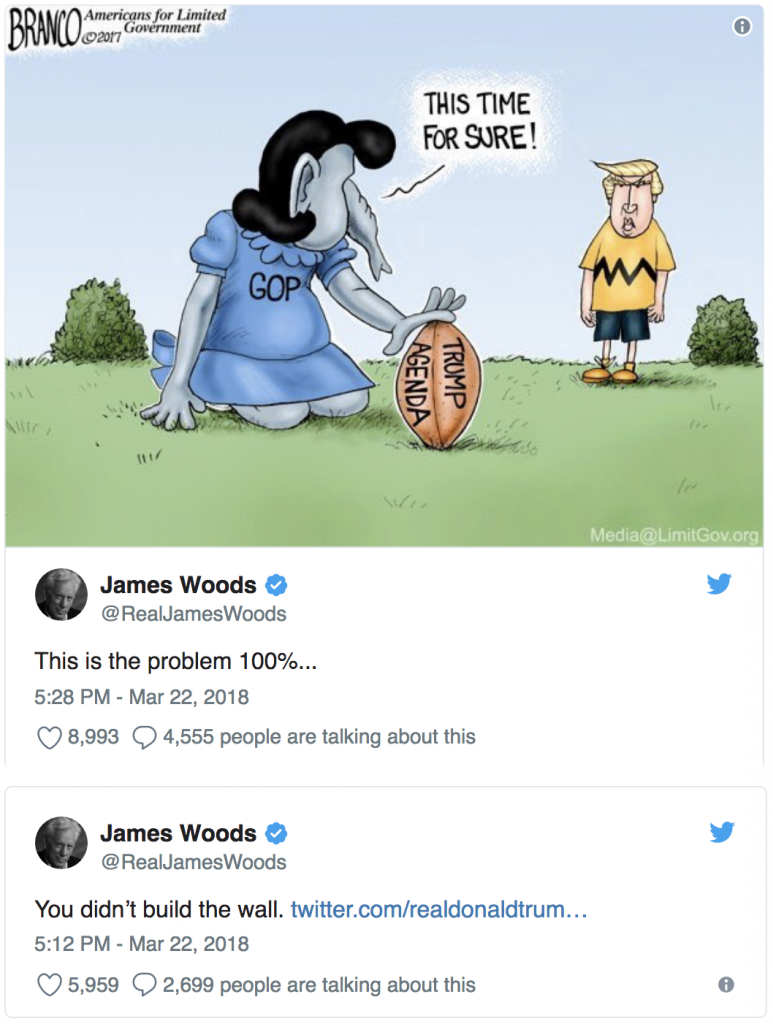 Although Trump at first signaled that he would sign the massive and massively unpopular bill, the growing fury in his own political base appears to have changed his mind. The president is now threatening a veto.

Woods’ frustration speaks for many — not in far-left Hollywood but in Middle America, who time and again see the GOP rolling over, even though they are completely in charge of the government. Moreover, all the wasteful spending on utter nonsense continues while priorities like border security remain under-funded.

On his nationally-syndicated radio show Wednesday, Rush Limbaugh said that he believes Trump signing this omnibus bill could be the kind of act that at long last creates a rift between the president and his loyal base of support.

“I predict this is going to be the first phase of Trump voters beginning to go wobbly. This is the swamp on steroids. This was not supposed to be happening anymore, this kind of thing,” he said.

“My fear is that this could be the issue, the item that begins to cause Trump voters to go wobbly, ’cause this was not… Let me put it another way.  This is the kind of thing that was going to stop — specifically under that umbrella, definition, ‘draining the swamp.’ My sense is that this is going to cause a massive amount of anger and opposition,” Limbaugh warned.