Christians Are Standing Up And Making A Difference

Last summer, our Public Library here in Temple, Texas decided to put up a display in the children’s section celebrating, and encouraging our children to celebrate, the LGBTQ lifestyles.  This display crossed a critical line from neutrality to advocacy.  That line that should not be crossed by a public, taxpayer-funded institution like our library, especially when it undermines a large part of the community’s moral values.  Having a wide variety of books in a public library is one thing; but erecting displays that promote dangerous and destructive lifestyle choices – especially to our children – is entirely another thing.  The job of the Library is simply to make informational and educational resources available for its patrons, not to promote one side over another in social or political matters.

For those who were following this story, there is good news to report:

On Monday, April 16th, the Temple Public Library Board voted unanimously (7-0) to approve a new display policy (see the new policy below, as well as the petition that was presented to the Library Board).  This decision came as a response to the deeply-held concerns, voiced over a period of several months (including at this meeting) by local citizens, about the pro-LGBTQ display erected in the children’s section of the library last summer.  We are grateful to God for this positive step forward on the part of our city’s officials, and we are cautiously optimistic that it will be implemented in a way that is truly neutral regarding sexual and moral issues.

Three days after the Board Meeting on April 16th, two leaders from our local action group, Concerned Christian Citizens, went to the Temple City Council meeting to address our city officials about the policy.  As the library policies are set by our city officials, this was not the first time we have attended a Council meeting and addressed our Mayor, City Council, City Manager and City Attorney.  During the Public Comments section of the meeting, we expressed our gratitude for the positive decision that has been made regarding library displays, as well as our intention to stay focused and watchful to ensure its bona fide implementation.  Even though we were met with an openly disparaging remark by our outgoing Mayor immediately after we sat down, the effort to publicly hold our elected officials accountable was well worth it. As it is written in Amos 5:15: “Hate evil, love good, and establish justice in the gate!”

Agendas to pervert and indoctrinate our children are pervasive in our times.  We are living in the days of which Paul spoke when he warned, “But realize this, that in the last days difficult times will come” (2 Timothy 3:1). But living in perilous times only magnifies the urgency of fulfilling our calling to be “the salt of the earth” and “the light of the world” (Matthew 5:13-16).  As followers of Jesus Christ, we make a difference when we show up and stand up wherever truth is under attack. And wherever truth is attacked, our neighbors – the ones we are commanded to love as ourselves (Matthew 22:39) – will always, inevitably, suffer under the lies we allow to stand if we do not show up.

In Temple and surrounding areas, we are seeing the Lord raise up a band of believers who will not go silently into the night. 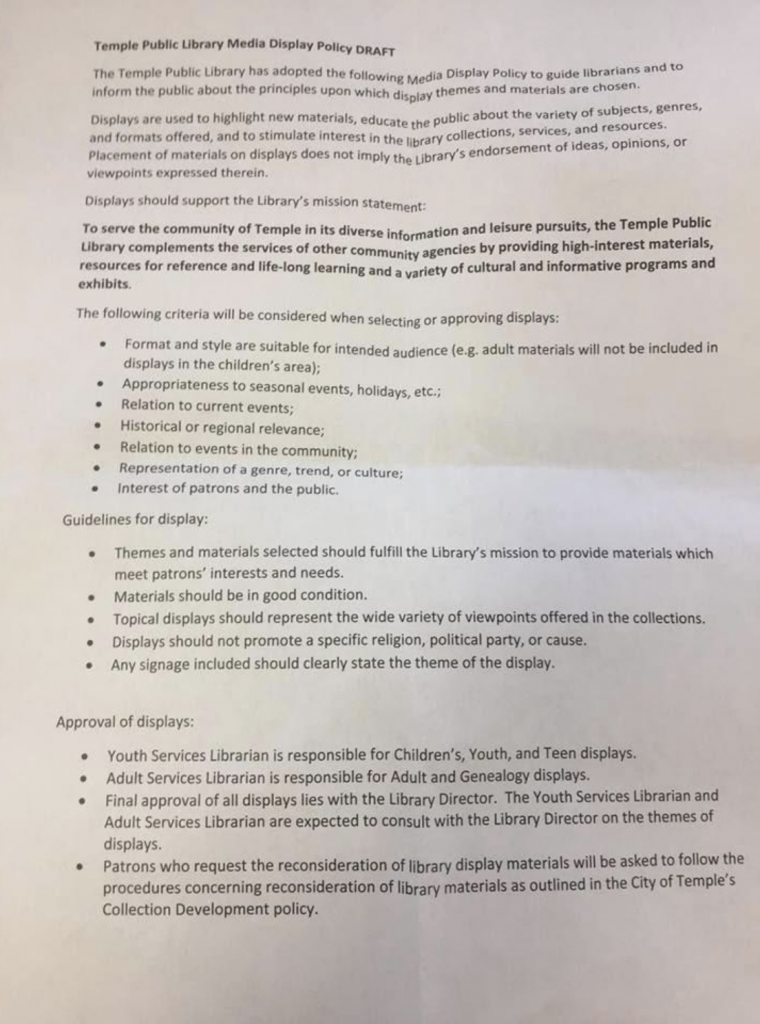 This is the Temple Public Library’s new policy for displays. 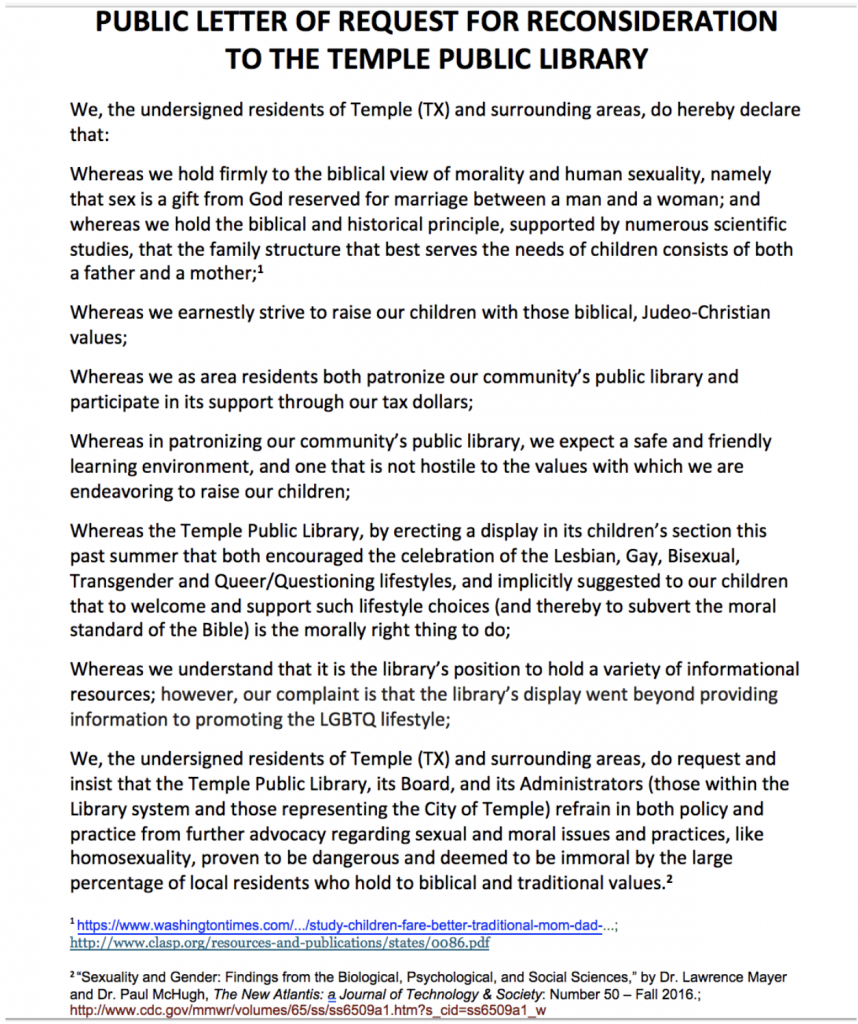 This petition, presented to the Library Board in January, gathered 966 local signatures.