In the days since violent clashes at a white nationalist rally in Charlottesville culminated in a neo-Nazi sympathizer driving his car into a crowd of counter-protesters, journalists have mainstreamed the self-described “anti-fascists” (or “antifa”) at the rally — largely ignoring their involvement in the escalating political violence in this country.

They aren’t interested in protecting America’s system of government, according to their own statements — they’re interested in destroying it.

From the very start of the Trump administration, far-left actors declared their intention to use massive demonstrations to disrupt the American political process as much as possible.

“We need to make this country ungovernable,” declared a female leader for Refuse Fascism shortly after the inauguration. “We need to do what the German people should have done when Hitler was elected.”

Refuse Fascism was a driving force behind the violent, politically motivated riots in Berkeley. Right-wing provocateur Milo Yiannopoulos — who at the time was an editor at pro-Trump website Breitbart — was scheduled to speak at the University of California’s Berkeley campus. He was forced to cancel the speech after mobs of protesters started fires, assaulted bystanders and pepper sprayed suspected Trump supporters as part of an organized effort to shut down the speech. 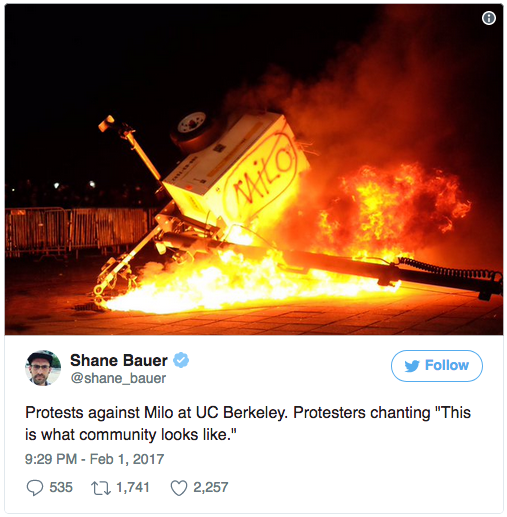 Refuse Fascism was among the left-wing groups advertising the Charlottesville rally and urged confrontation with the white nationalists: “Drive them OUT of Charlottesville and out of power!”

Refuse Fascism was far from the only left-wing fringe group at Charlottesville.

One anarchist group that was at Charlottesville, CrimethInc, holds that anarchism is necessary to destroy white supremacy, which the group says cannot be fully extinguished in a democracy.

“Anarchism is one of the most thoroughgoing forms of opposition to fascism, in that it entails opposition to hierarchy itself. Virtually every framework that countenances hierarchy, be it democracy or ‘national liberation,’ enables old power imbalances like white supremacy and patriarchy to remain in place, hidden within the legitimacy of the prevailing structures,” the group explains.

They similarly want to destroy law enforcement and capitalists.

“We must identify the forces underlying their laws and their order—white supremacy, patriarchy, policing, capitalism, and the state. We have to work together to keep ourselves safe and reimagine the world without them,” the group states in an article, which was reposted on popular antifa website It’s Going Down.

The communist group “sent many of its members to Charlottesville, Va., to beat back the Nazis and Klan who marched there,” according to a post recapping the group’s participation in the weekend’s violence.

The group took credit for organizing the vandals who toppled a city-owned Confederate statue in Durham, North Carolina this week.

Workers’ World’s stated goals are classic Marxism, including igniting an international socialist revolution and “the shutdown of the Pentagon and the use of the war budget” — that is, the funding for the Department of Defense — “to improve the lives of the working class and especially the oppressed peoples.”

While Workers World is currently fighting (literally) with white nationalists, the group is opposed to all in the “ruling establishment” who the group explains hide “behind a veil of ‘democracy’ and ‘human rights.’”

“Those in the ruling establishment who see their reputation in tatters are appalled by what happened [at Charlottesville], but not for the right reasons,” read a Workers World post after Charlottesville. “They want to continue to exploit and dominate most of the world, but behind a veil of ‘democracy’ and ‘human rights.’ The people are showing by their actions that only by taking the fight for justice into their own hands, with no confidence in the organs of state power, can they make progress.”

The post concluded: “Long live the independent struggle of this new progressive movement against the fascists, the cops and the capitalist establishment!”