Fox News has been through the wars in recent months. Chairman and CEO Roger Ailes left not of his own free will after allegations of sexual harassment. And primetime host Megyn Kelly fled for another network. Then Bill O’Reilly was escorted from his primetime slot, again after claims of sexual harassment, and one of his regulars, Jesse Watters, announced an abrupt vacation after claims he made a suggestive comment.

But one of the network’s most powerful and enduring stars, Sean Hannity, is warning that the network is essentially “done” if what he sees as a strategy to oust Fox Co-President Bill Shine were to succeed.

Hannity took to Twitter on Thursday to defend Shine, according to a report in Variety.

“Gäbe i pray this is NOT true because if it is, that’s the total end of the FNC as we know it. Done. Best Sean,” Hannity tweeted, linking to Gabe Sherman’s New York magazine story “citing unnamed sources who claimed that Shine has become worried about what he perceives as lack of public support for him from 21st Century Fox leaders Rupert, Lachlan and James Murdoch,” Variety reported.

He then quickly apologized for the extra phonetics mark in Sherman’s name.

“Ha. Gabe sorry about the 2 dots. I couldn’t do that again if I tried. Best Sean.”

Hannity suggests Shine is being set up as the victim in an internal Fox News strategy, again explaining on social media: “Somebody HIGH UP AND INSIDE FNC is trying to get an innocent person fired. And Gabe I KNOW WHO it is. Best Sean.”

The two, Variety reported, have been together a long time, with Shine’s hiring at Fox coming after Hannity’s recommendation. And Shine was a producer early on in the history of “Hannity & Colmes.”

When Ailes departed, Shine was appointed by owner Rupert Murdoch to assume the executive post, along with co-President Jack Abernethy.

But Shine was named, among several others, in this week’s race discrimination complaint that carries allegations from several workers into the courtroom.

The most recent development was the announcement by Watters he’d be on vacation a while.

Reported the Hill, “His abrupt departure comes just three days into the new prime-time slot for his show. CNN’s Brian Stelter noted that Watters will miss two days of his first week in prime time, as well as his weekend show.

Watters was criticized for a comment he made about liking the way Ivanka Trump was holding a microphone.

Amid all the controversy, WND reported earlier this month that Fox News issued a memo ordering all involved in its report to attend mandatory sensitivity training “to ensure that we maintain a professional workplace.”

The memo was issued by Fox’s head of human resources, Kevin Lord, urging employees to register for the one-hour training and finish it “as soon as possible.” 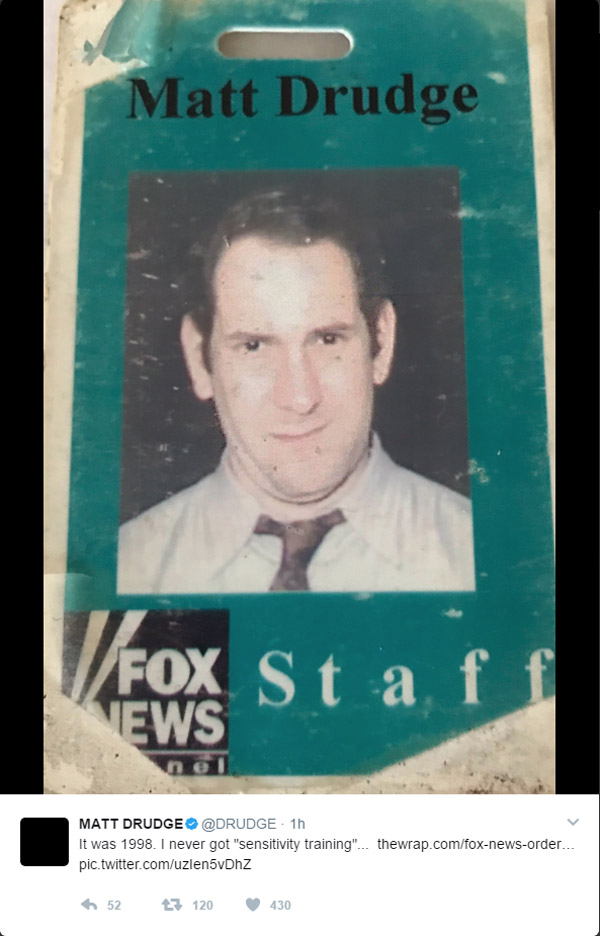 As WND reported, O’Reilly spoke out publicly in a podcast Monday about the sexual harassment accusations that ended his career – vowing that Americans will “be shaken” when they learn the truth about the whole affair.

WND also reported on what may be a new direction for the network, with the emergence of Rupert Murdoch’s politically progressive son, James, as a leader of the empire.

The 44-year-old Murdoch reportedly was involved in the decisions to remove both Ailes and O’Reilly, which could signal a shift.

This week the Hollywood Reporter, citing insider sources, cast the “dream” of James Murdoch as “combining Sky News and Fox News with the vast Murdoch reach and producing some ultimate global news brand” that apparently would look more like CNN than the current Fox News.

“Where Fox News is parochial and America First, the new global brand is worldly and unlimited,” the Reporter said.

The paper said James Murdoch’s “longtime annoyance if not disgust with Fox News became cold fury” after the Times’ April 1 story about the accusations of sexual harassment against O’Reilly.

Despite the fact that Fox News is the biggest earning division of 21st Century Fox – with 20 percent of its profits – James “regarded many of the people at Fox News as thuggish Neanderthals and said he was embarrassed to be in the same company with them.”

The feeling apparently is mutual, with many at Fox News regarding James as “exhibit No. 1 of the liberal elite entitlement that Fox had so profitably programmed against.”

In its 2010 story, the New York Times reported that Rupert Murdoch’s eldest son, Lachlan, now executive co-chairman of News Corp and 21st Century Fox, along with his daughter Elizabeth, a TV producer in London, and James “are sympathetic to Democratic causes and frequently voiced concerns to their father” about Fox News’s coverage of Barack Obama’s initial presidential campaign in 2008.

On the upside, Bloomberg has just published an in-depth profile exploring where Hannity stands in the Fox News pantheon, appropriately headlined: “And Then There Was Hannity.”

“[A]t a time when the company badly needs someone to steady the organization, Hannity, with his mind-meld connection to the White House and his deep, abiding connection to the Fox News brand, is the alpha anchor right now,” reports Bloomberg.

Indeed, the in-depth story quotes Brian Rosenwald, a media historian at the University of Pennsylvania, as observing: “Hannity’s experiencing a renaissance. It’s his network now.”

‹ The Left Wing Takeover of Fox News › Bravo to the Truth: What’s Wrong with Transgender Ideology