Writing in this space on Tuesday, I way too graciously headlined a piece by saying: “In Case You Missed It, the NFL Might Have Caved On a Lot More Than Just the Anthem Protests.” I must apologize for using the word “might” in this headline. Because there’s no might about it, the NFL has completely caved on the anthem protests.

NFL Commissioner Roger Goodell addressed the media on Wednesday, and made plain the fact that the NFL will only “encourage” their players to stand. The league will not “force” them to stand for the anthem.

“We believe that our players should stand for the national anthem,” Goodell said. “We want our players to stand, we’re going to continue to encourage them to stand.”

Goodell, proving that he has now made the transition from NFL commissioner to protester PR hack, explained that the players aren’t trying to disrespect the flag. “They are not doing this in any way to be disrespectful to the flag, but they also understand how it’s being interpreted, and that’s why we’re trying to deal with those underlying issues,” Goodell said.

To complete his public surrender, Goodell made it clear that the only people who can compel the players to stand, is the players. “We have about half a dozen players. We hope and are going to try to get that to zero,” Goodell said.

Further solidifying the idea that Goodell has no plans to confront the protesters in any way, NFL owners confirmed Goodell’s surrender:

Not only that, Jed York added insult to the injury by proclaiming the NFL-NFLPA meetings as a vindication of Colin Kaepernick: 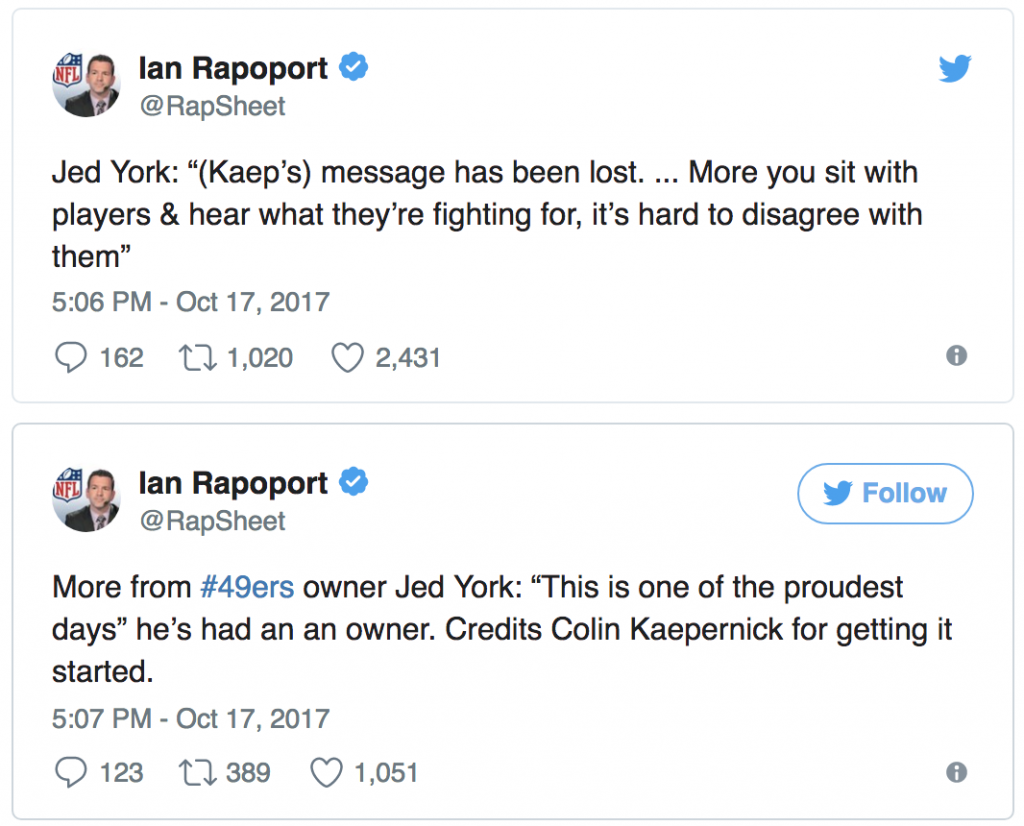 One wonders why, given San Francisco’s 0-6 start and disastrous quarterback situation, why York hasn’t called Kaepernick to come back and lead his team? Think about how much more pride York could have, if after this great moment he brought Kaepernick back to San Francisco as a starter?

Perhaps funniest of all, Goodall sought to make it clear, that the NFL had no interest in getting involved in politics:

Steve Deace of Conservative Review basically nailed the response to that:

So now defending the anthem, is politics. Which is beyond insane, because the anthem is nothing more than a song celebrating a flag which is supposed to signify unity over and above partisan, racial, class, or social differences. The flag, in a pre-Kaepernick world, was glorified by the NFL as a symbol of unity. So how can defending that symbol of unity now, be political?

Spineless, doesn’t go far enough to describe Goodell here. The vast majority of NFL fans, and Americans, oppose these protests. All Goodell would have had to do at these meetings, is show the players a profit-loss projection of where the NFL will be a year from now, if these protests continue. Would that have convinced all of the protesters to abandon their demonstrations?

However, the vast majority of the league is composed of players who don’t make the kind of money Colin Kaepernick was making. Eventually, they would have pressured their financial betters to end their charade. All it would have taken was a stand, someone to fight for a change. Someone who would have stood for the fans who have carried the league for years.

Unfortunately, that person doesn’t exist at the NFL.