The Winter Olympic games are well underway in Pyeongchang—giving the media endless opportunities to highlight (in addition to the incredible feats of athleticism) the developing political climate and tension between North Korea and, well, just about every other country on Earth.

In an attempt to thwart the U.S. from drawing attention to its abysmal human rights record, North Korea sent some of its highest-level officials to Pyeongchang—including Kim Jong Un’s younger sister, Kim Yo Jong.

But, as it turns out, the U.S. media had little interest in drawing attention to the brutality of the Kim regime anyway.

Many mainstream media outlets were happy to put a spotlight on 30-year-old Kim Yo Jong—even going so far as to deem her the “Ivanka Trump of North Korea.”

What’s missing from their coverage? The Kim dynasty is a tyrannical dictatorship. Kim Jong Un has repressed political opposition, executed senior officers and even executed his own family.

The United Nations found their human rights atrocities were so heinous they were deemed crimes against humanity. More than 120,000 people are estimated to be imprisoned in North Korea’s prison camp system. Detainees are subject to forced labor, torture, starvation, and rape.

Thus, it came as a shock to many Americans to see the media’s strange coverage of the  North Korean presence at the Olympics.

Here are some of the worst offenders:

1. Kim Yo Jong gets the red carpet treatment from CNN, saying, “If ‘diplomatic dance’ were an event at the Winter Olympics, Kim Jong Un’s younger sister would be favored to win gold.” Seriously? 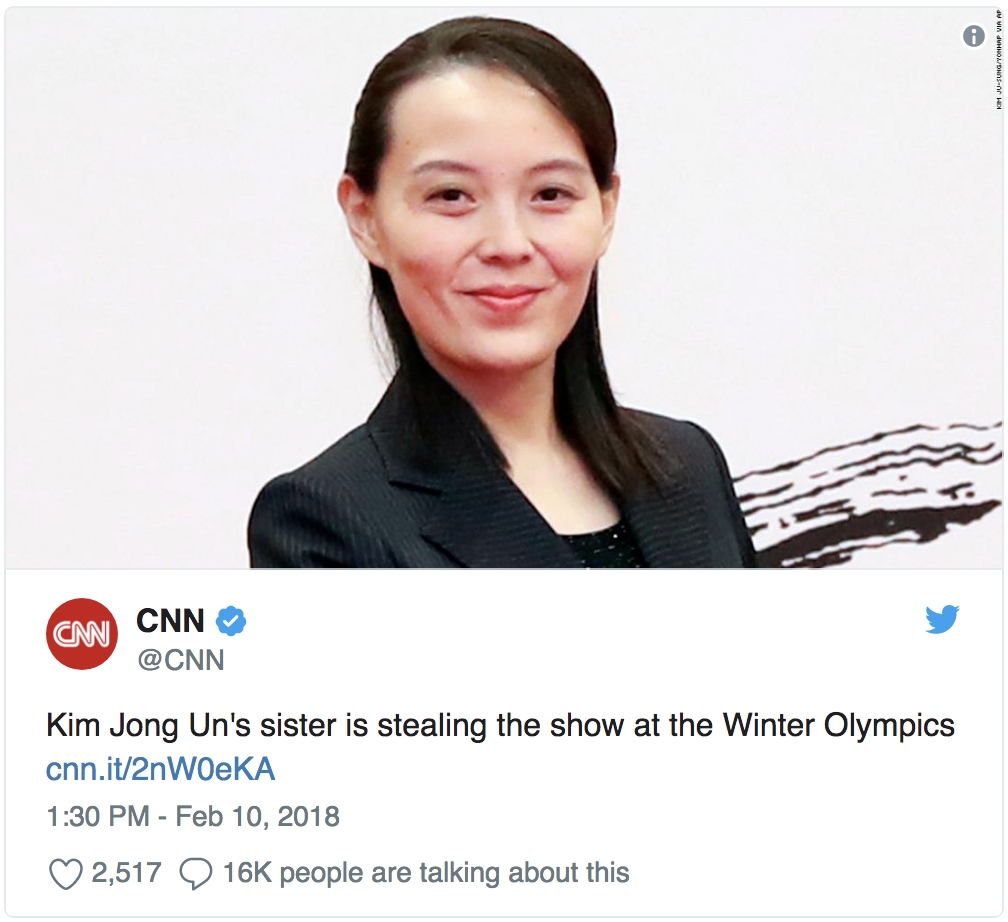 2. How dare our vice president try to “sabotage” the North Koreans’ charm? 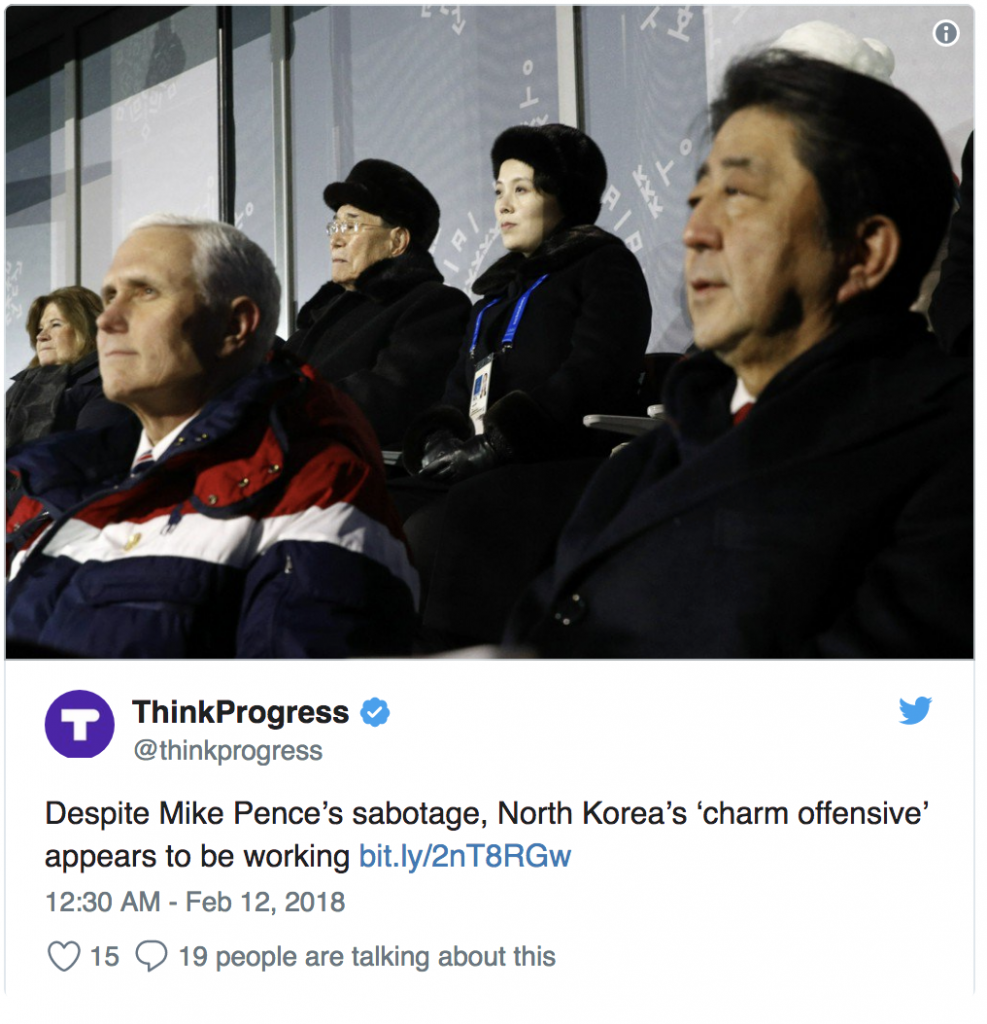 3. The New York Times couldn’t hide its palpable hatred for the Trump administration. 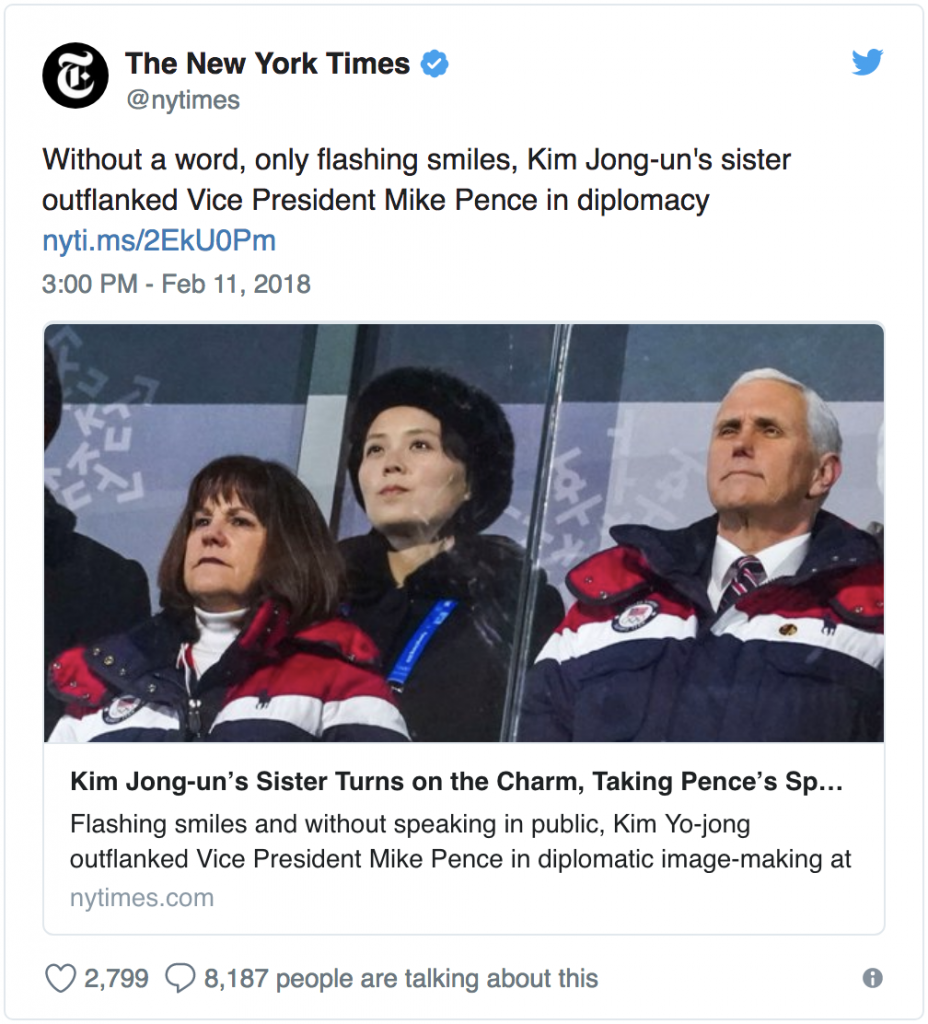 4. One of the most recent reminders of the sheer evil of the North Korean regime was the horrific death of Otto Warmbier. His father, Fred Warmbier, attended the Olympics opening ceremony as a guest of Vice President Mike Pence—hoping his presence would remind the world of what North Korea did not just do to his son, but countless other innocent people. And how did the media cover his presence? Like this. 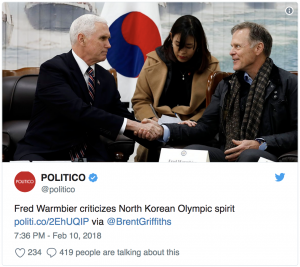 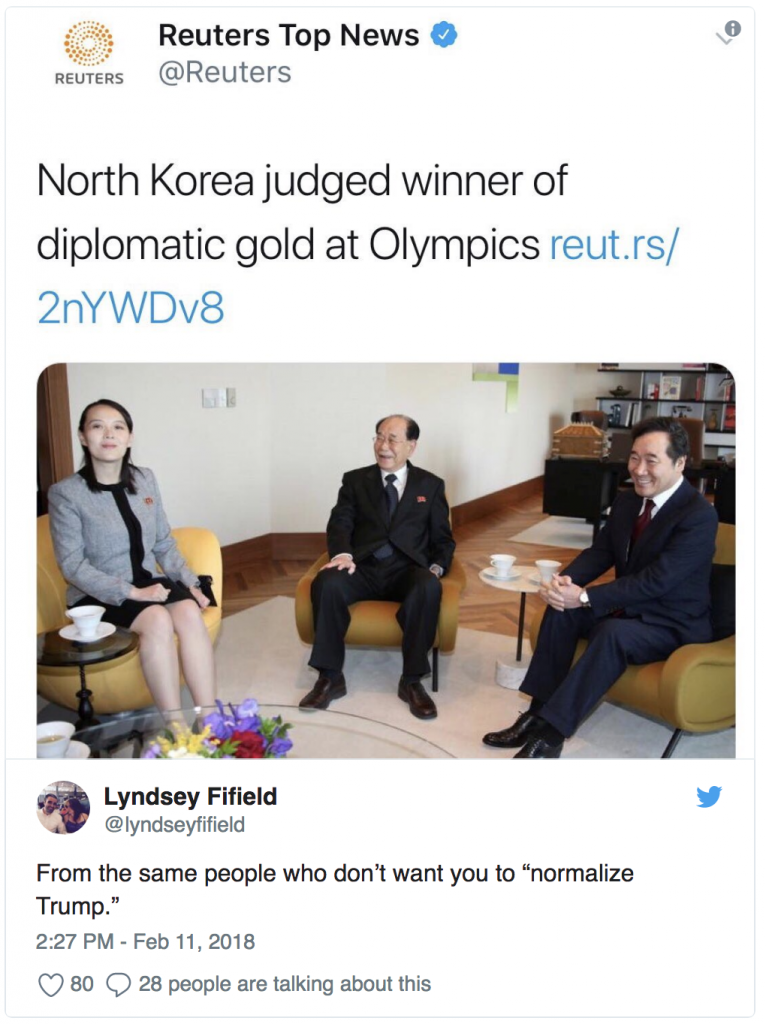 6. This is the kind of glowing praise usually reserved for movie stars. 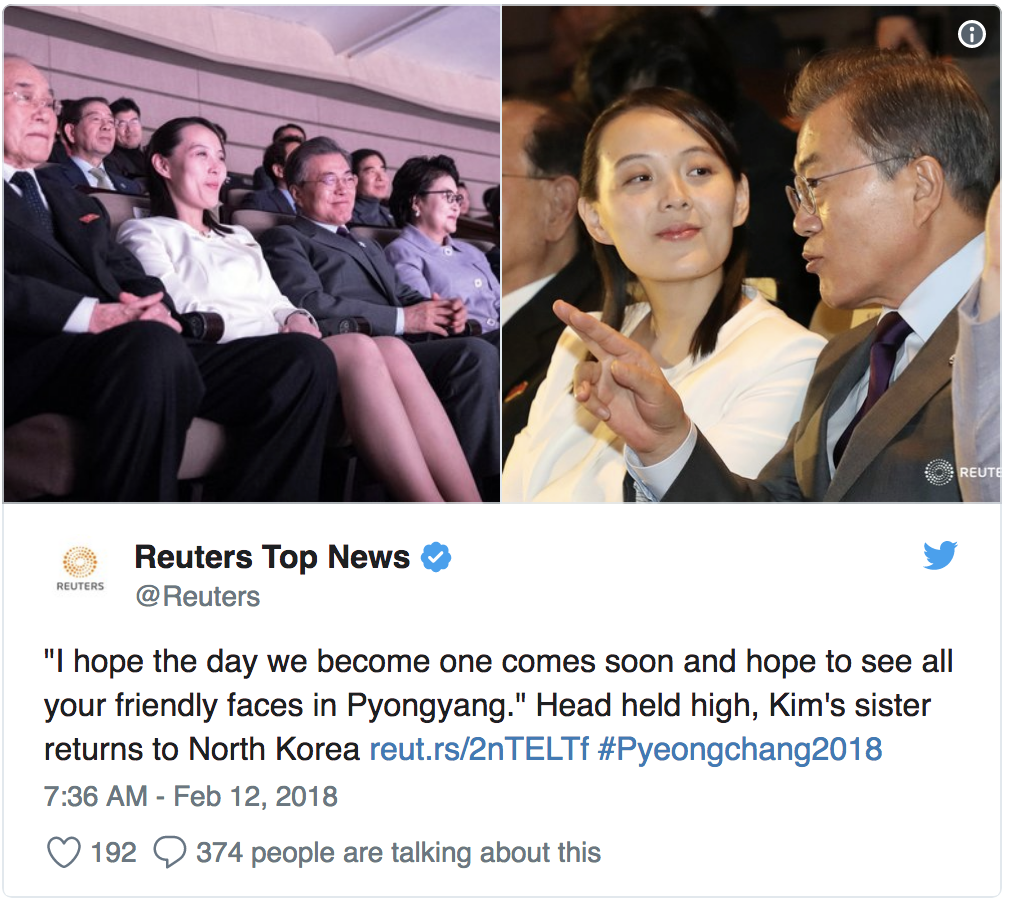 7.  The subtext here is clear as day—the left believes Ivanka Trump is “complicit” in her father’s “evil administration,” much as Kim Yo Jong is complicit in the actions of an actually evil regime. 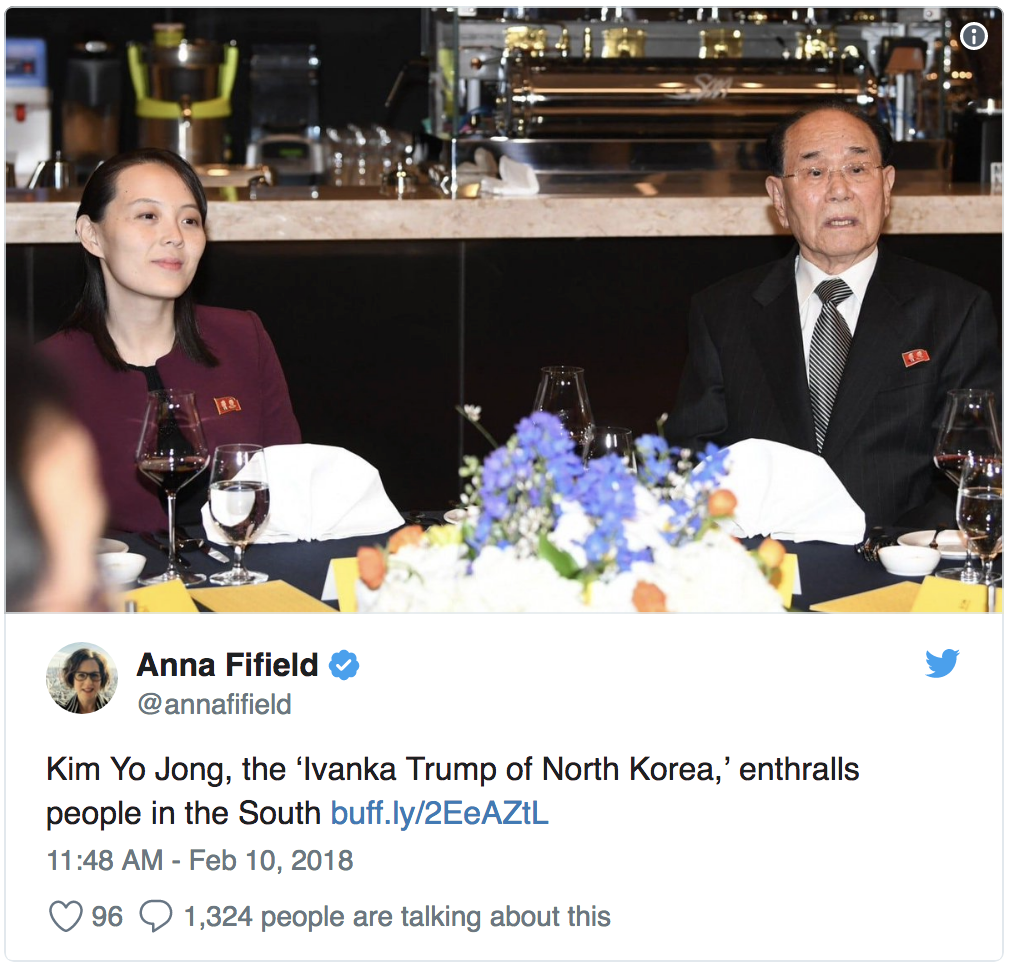 However, many people—even some liberal journalists—were quick to fire back against the media’s grotesque praise for the brutal regime. 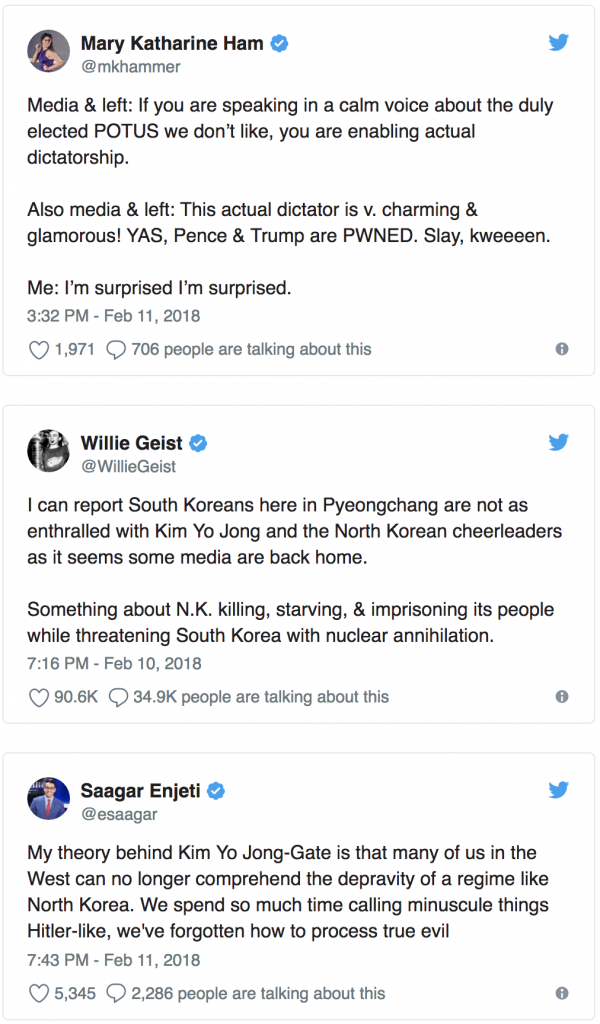 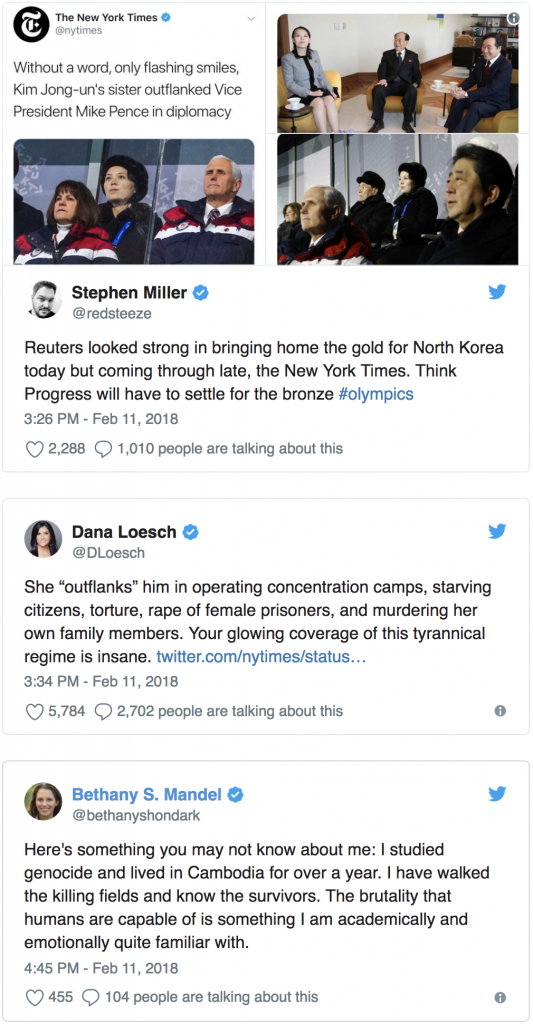 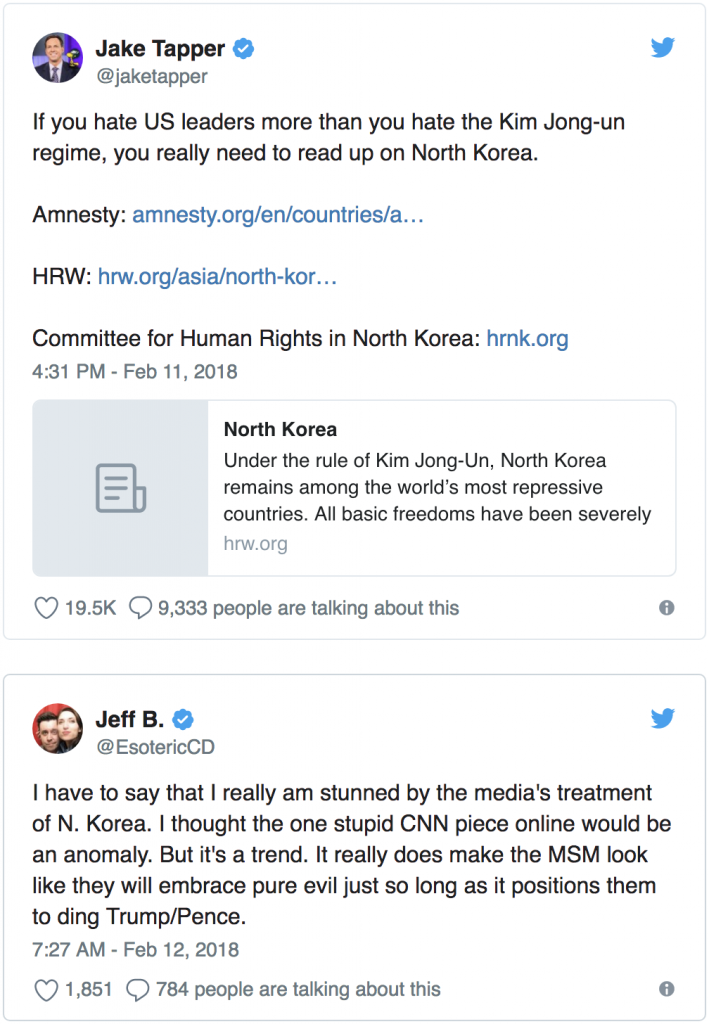