Each new day brings another false accuser to light. Tim Miller, an open sodomite, who served as Jeb Bush’s communication director and who also was a “Never Trumper,” appears to be the one who planted the lies about Judge Moore in the Washington Post.

Miller has a long history of working with RINOs and moderates. After serving on John McCain’s 2008 presidential campaign, and later John Huntsman’s 2012 campaign, Miller went on to become Jeb Bush’s top communications aide and executive director of Bush’s America Rising PAC. Despite Miller’s openly homosexual status, he also previously served as spokesman for the Republican National Committee.
Proof of Miller’s blatant lies and sabotage, have surfaced in the form of several text messages that outline his involvement with several other “Never Trump” co-horts to malign Judge Moore’s character and Tim Miller has been flaunting his support of Judge Moore’s opponent for weeks: 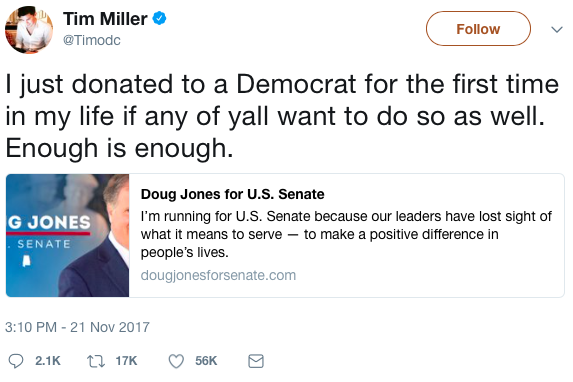 We cannot allow Tim Miller and his co-horts to continue highjacking our elections, and ultimately, the direction of our country. We must stand together and back honorable, godly men and women like Judge Moore. Please keep Judge Moore and his wife Kayla, in your prayers and continue to support them.
“Through our God we shall do valiantly; for it is that shall trend down our adversaries.” Psalm 60:12
CRTXNEWS. All rights reserved www.crtxnews.com