That would mark a 15-year high.

“In our economic projections which underlie our budget projections, inflation-adjusted GDP–or real GDP–expands by 3.3 percent this year, and by 2.4 percent in 2019,” CBO Director Keith Hall told the House Budget Committee in testimony on April 12.

“Most of this growth is driven by consumer spending and business investment, but federal spending also contributes a significant amount this year,” he said.

Hall testified that the tax law signed by President Donald Trump at the end of last year is stimulating economic growth.

“In our projections, the effects of the 2017 Tax Act on incentives to work, save and invest, raise real potential GDP throughout the 2018 and 2028 period,” he told the committee. “Over the same period, the Tax Act is projected to boost the level of real GDP by an average of 0.7 percent and nonfarm payroll employment by an average of 1.1 million jobs.” 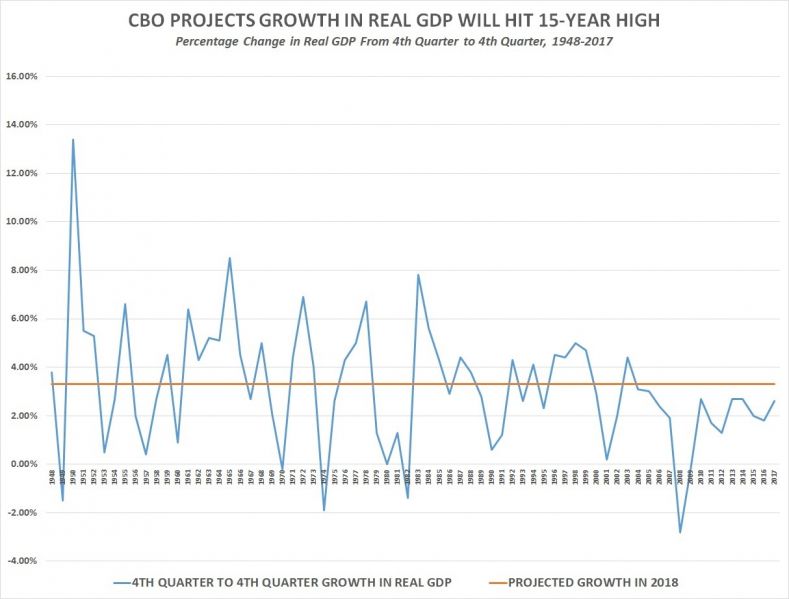 CBO’s budget outlook noted that CBO had increased its projections of economic growth for this year and next year.

“CBO significantly boosted its projections of the growth of real GDP in 2018 and 2019, mostly because of the recent changes in fiscal policy,” CBO says in its “Budget and Economic Outlook: 2018-2028.

Since then, fourth-quarter-to-fourth quarter real GDP has never again reached as high as 3.0 percent.

After next year, however, the CBO’s projections anticipate that the annual growth in real GDP will drop below 2 percent.

“Rising interest rates and prices, along with the slower growth in federal outlays after 2019 projected under current law, restrain demand and thus keep the growth of actual GDP below the growth of potential GDP from 2020 to 2026, in CBO’s projections,” says CBO.

“The higher marginal tax rates on personal income that follow from the expiration of temporary provisions of the 2017 tax act at the end of calendar year 2025,” CBO says, “also contribute to the slower growth in actual GDP in 2025 and 2026 because the reduction in disposable per­sonal income restrains consumer spending (and some consumers change their behavior in anticipation of the rise in taxes).”

Thus, by this second measure, CBO is projecting real GDP will hit a 13-year high.

CNSNews.com determined that the percentage change in real GDP from fourth quarter to fourth quarter would hit a 15-year high, according to CBO’s latest projection, by comparing that projection (3.3 percent) to the historical numbers published in the BEA’s Table 1.1.11 “Real Gross Domestic Product: Percent Change from Quarter One Year Ago.”

CBO confirmed that it was correct to compare its projection that real GDP would grow by 3.3 percent this year to the fourth quarter to fourth quarter numbers in the BEA’s Table 1.1.11. 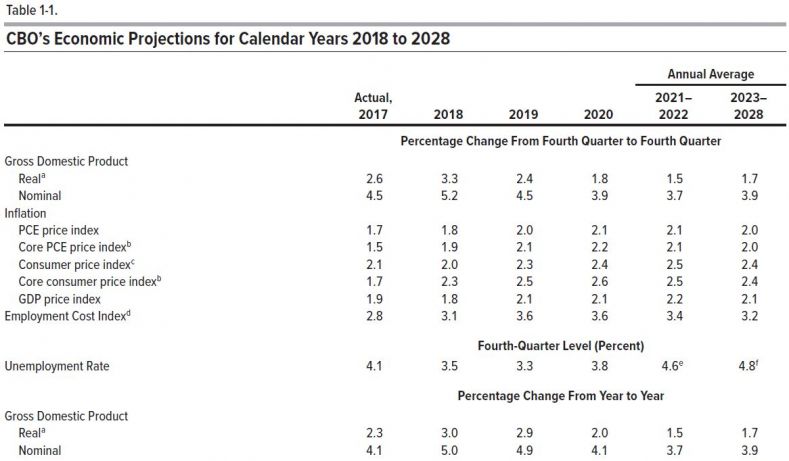