WASHINGTON – Sundaes will never be the same, say Christian activists troubled by the invasion of the U.S. market by a Canadian ice-cream chain called “Sweet Jesus” that seems hell-bent on a marketing plan centered around soft-serve blasphemy.

The Toronto-based company founded by Andrew Richmond and Amin Todai in 2015 now has 19 locations in Canada, and one at the Baltimore-Washington International Airport. It has plans to open in other U.S. locations, such as Mall of America.

One ad on the company’s website shows a Nativity Scene, but instead of Baby Jesus, there’s an ice-cream cone. Many of their ads are replete with cherished Christian and Catholic symbols that are used to mock faith, including a rosary beads, a crucifix with a corpus, and angels.

And there’ something just downright creepy about the Mad Magazine-style imagery of children in the company’s ads. Some of the children have bruises and appear to be abused. Some say the ads sexualize children and have accused the company of pandering to pedophiles. 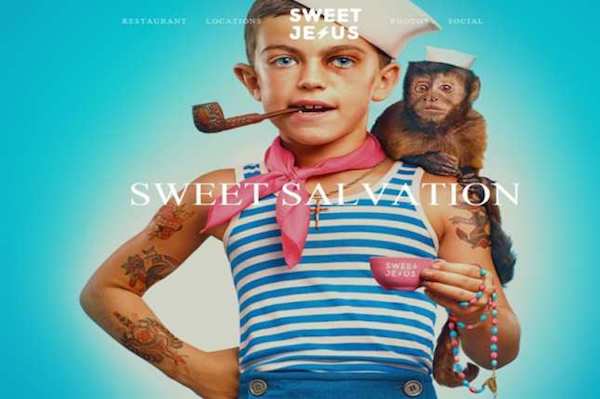 All this is has led to a boycott effort by Christians in the U.S.

There are also Satanic symbols interspersed throughout the ads, such as upside-down crosses, lightning bolts, skulls, roaring wildcats, and images that suggest vampires and blood.

“The entire marketing concept of their company is to mock the name of the Lord Jesus Christ,” wrote Elizabeth Johnston about the company on her blog Activist Mommy. 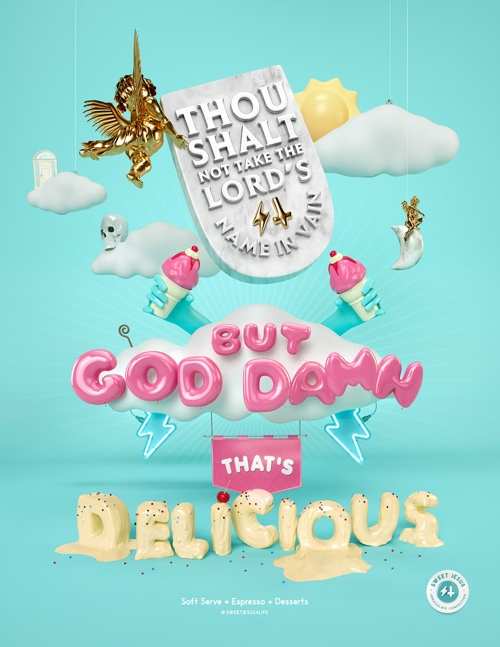 The company has included on its website a disclaimer about its name that reads: “Our name was created from the popular phrase that people use as an expression of enjoyment, surprise or disbelief. Our aim is not to offer commentary on anyone’s religion or belief systems. Our own organization is made up of amazing people that represent a wide range of cultural and religious beliefs.”

If you’d like to sound off on the “Sweet Jesus” invasion of the U.S., you can reach the owners through the company’s parent company by emailing inquiries@monarchandmisfits.com or calling 647-888-8420.