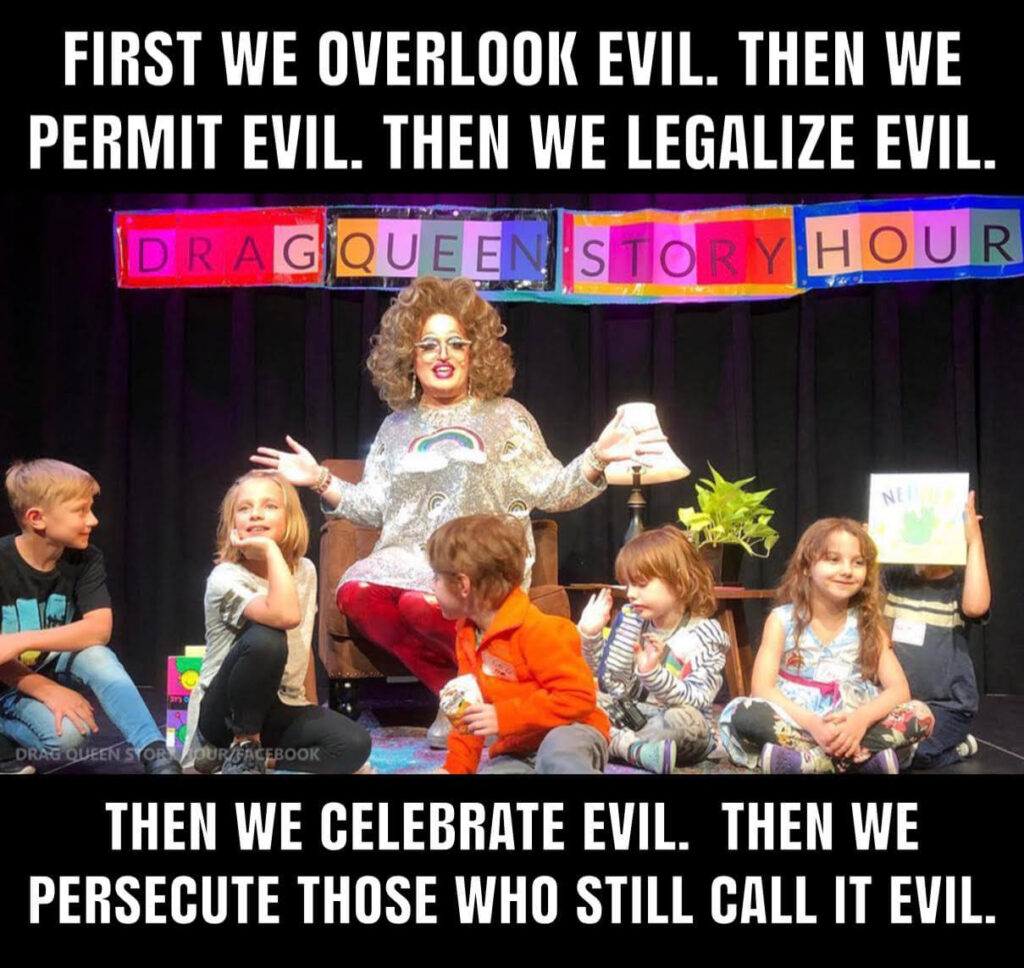 On April 16, 2021, State Rep. Bryan Slaton (R-Royse City) offered an amendment on House Bill (HB) 18, a prescription drug savings bill. Slaton’s amendment would have prevented sex change drugs and hormones from being administered to children by parents and doctors. The amendment failed, 57 ayes to 79 nays. Twenty Republicans voted with 59 Democrats to defeat the amendment.

By opposing this amendment, these Republicans are allowing parents and doctors to pervert children with sex change drugs and hormones, preventing the children from having the normal and natural sexual development of their biological birth sex. What kind of perverted thinking is this?

Perversion is altering something from its original state to a distortion from what it was intended to be. God created man and woman. A person’s sex is determined at conception, XX chromosomes for women, and XY chromosomes for men. What could be more perverted than experimenting on a child with sex change drugs and hormones?

The radical, godless, pro-homosexual, pro-transgender movement is working to pass legislation that would force individuals, businesses, churches, schools and government entities to accept, affirm, and celebrate those who promote and practice immoral and perverted sexual activities. The Democrats want to grant minority status and special privileges to those who practice perverted sexual activities. A moral wrong does not make a civil right.

The whole pro-homosexual, pro-transgender movement is about grooming children in grade school, starting in kindergarten, so that they can be recruited into this perverted lifestyle. This is pedophilia. This promotion of pedophilia is occurring all over the state in libraries that allow “Drag Queen Story Hour” programs, as well as in government school curriculum.

This bizarre action by parents and doctors to normalize medical experimentation to alter a child’s biological sex is child abuse and criminal. Parents who participate in this insane activity should have their children rescued from them. Doctors who prescribe sex change drugs and hormones as well as those who perform sex change surgery on children are evil and should have their licenses revoked. To prey on young children in such a manner is despicable and demonic.

These 20 Republicans have chosen to support the perverted agenda of the pro-homosexual, pro-transgender, and pro-pedophilia Communist Democrats.

“Those who forsake the law praise the wicked, but those who keep the law strive with them.” (Proverbs 28:4)

My sources have informed me that the Republican leadership under Speaker Dade Phelan had cut a deal with the Democrats not to pass any legislation restricting the promotion or practice of transgender or homosexual behavior.

On Friday, April 16, HB 1399 by Rep. Matt Krause passed out of the House Public Health Committee. This bill prohibits healthcare providers and physicians from performing sex change surgery or prescribing sex change drugs or hormones to anyone under the age of 18. It will now go to the Calendars Committee to set a time for it to be heard on the House Floor.

My prediction is that HB 1399 will languish in the Calendars Committee until late in the Session which ends May 31st. The Republican leadership will likely bring it up for a vote, so that the 20 Republicans who voted against Slaton’s amendment, when it really mattered, can now redeem themselves and vote for HB 1399. They know that it will pass the House too late in the Session to be passed by the Senate. Therefore, it will die, but the 20 Republicans who opposed Rep. Slaton’s amendment can fool their constituents, telling them that they voted to stop the use of sex change drugs and hormones, and sex change surgery in children. In fact, these 20 Republicans voted to kill Rep. Slaton’s amendment to HB 18, which will be passed by the Senate.

This is how politicians pull the wool over their constituents’ eyes.

Call these representatives and tell them that you disapprove of their actions, https://house.texas.gov/members/