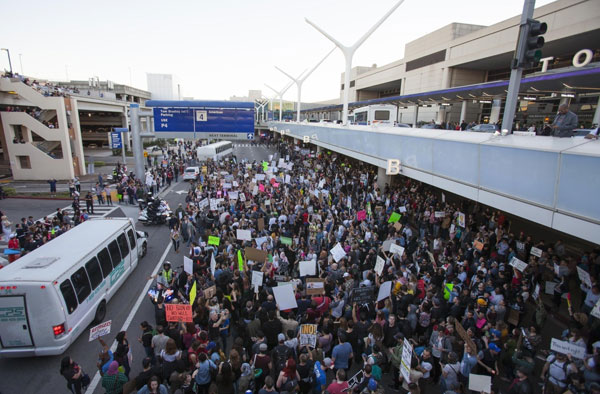 Needless to say, our side was vastly outnumbered by the angry, irrational mob.

While Americans (and the world) watched the rabid protests across the country, MassResistance activists in Los Angeles directly confronted some of the protesters.

On Sunday, Jan. 29, thousands of rabid and angry left-wing protesters converged at the Los Angeles International Airport. They were there to protest President Trump’s 90-day travel ban from seven countries, denounce Israel, and to condemn America in general. Many also blocked traffic, creating a nightmare for travelers. Similar protests were held across the country. 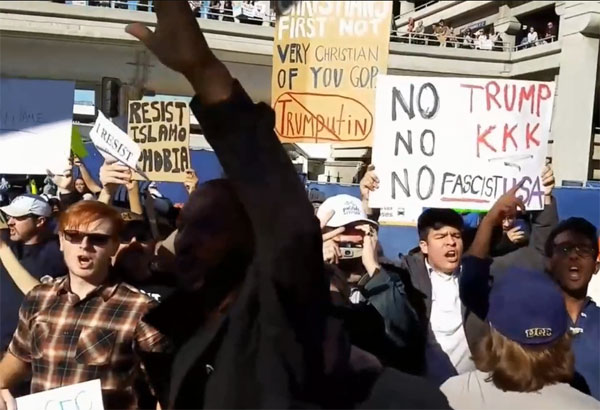 The rabid left-wing protesters crossed the street and rushed to surround our group. 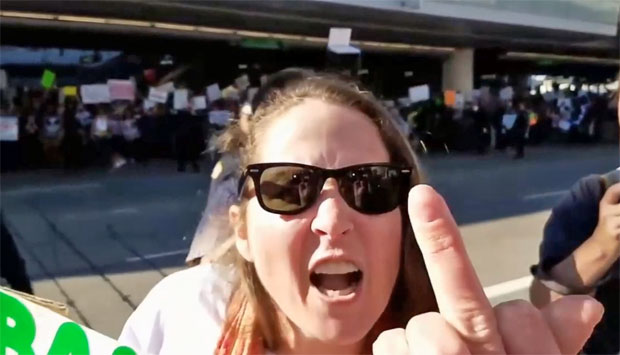 The middle finger. Ironically, this woman was right in Arthur Schaper’s face screaming “No hate, no hate!”

But members of California MassResistance also showed up to send them a message: That Americans aren’t going to be bullied by these tactics of unhinged anger, hatred and intimidation. That we’re going to challenge them one-on-one to defend their bizarre views and odious actions. And that Americans across the country greatly support the temporary ban.

We were covered by Brietbart News and various local media.

As the video shows, our group originally lined up directly across an airport roadway from the massive protest crowd, facing them with signs and a bullhorn. A few police were also there.

The video shows basically three stages what happened next:

It’s important to show up!

We believe that it’s important that conservatives and pro-family people confront this kind of planned action and intimidation. Make no mistake, there’s a lot of money and energy behind organizing their people, bussing them in, getting them to a fever pitch, etc. The Left does these things specifically to make everyone else afraid and disoriented. They want us to run and hide. When we don’t do that, it disrupts their sense of power and superiority. 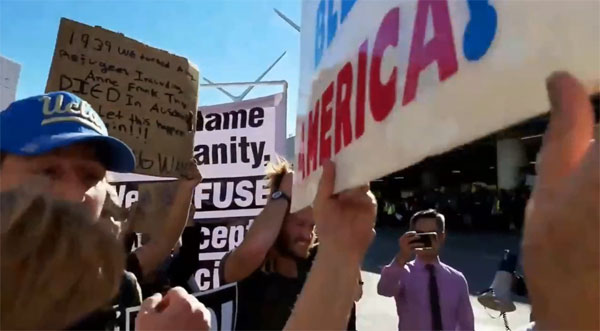 In the middle of the melee, a member of our group holds up her “God Bless America” sign facing the mass of the protesters. Man in purple shirt taking photo is local CBS-TV reporter.

It’s outrageous that the police almost always seem to have a “hand’s off” approach to left-wing thuggery and hooligan behavior. We’ve seen that first-hand quite often over the years. But it’s surprising that they would back off even at the Los Angeles Airport. 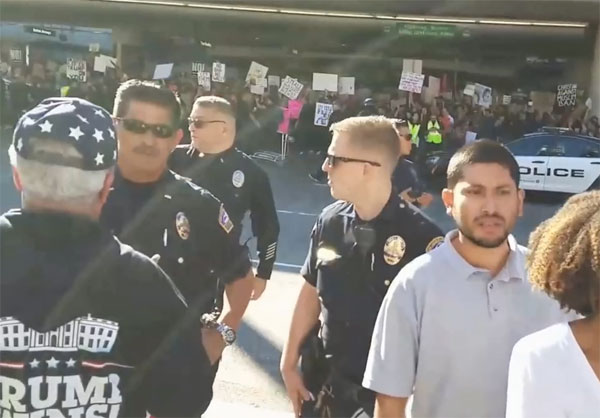 The police were there, but mostly just stood and watched.

Normally, police do not allow anyone to even loiter around the drop-off areas and entrances of a major airport, much less cause huge disturbances and block traffic. It would certainly appear that they did not have a permit for a demonstration or event. But this time the police did very little to discourage illegal behavior – which has been the experience at anti-Trump outbursts across the country.

As the Los Angeles Times reported:

[D]ozens of protesters sat down, blocking the airport’s busy thoroughfare — World Way — and refused to leave until all detainees are released. Two lines of airport police officers with helmets and batons stood nearby.

At 10 p.m., two people were arrested for blocking the roadway, according to LAX police Officer Rob Pedregon. The two were cited and released.

Late Sunday, airport officials said police and demonstrators had brokered an agreement that allowed for upper and lower level roads to alternate being fully open for 30-minute periods. During each period, demonstrators could block one level for 15 minutes while the other level remained open.

This is beyond the imagination of a civilized society. Only two people were arrested! Of course, the police would only make this kind of “deal” with left-wing zealots. Anyone else would be sent to jail. But we can’t let this stop us from showing up, too! 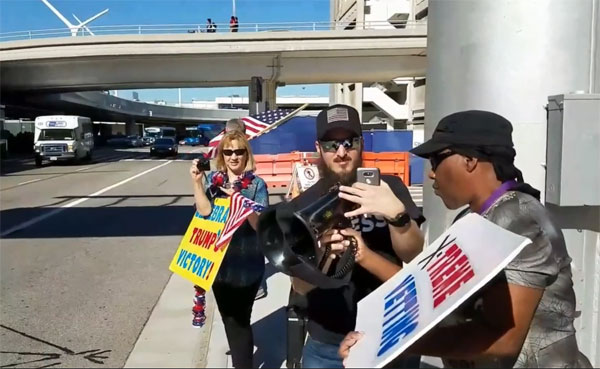 Earlier, after arriving at the airport a few members of the group start to line up across from the massive protest. Then the fireworks began!